Sentinel-2 sees a persistent degradation of forests near the Gorges du Verdon, after 2017 drought

Coming back from our stay in the Alps, we stayed one day near the Verdon Gorges, the European Grand Canyon (I know there is a difference in scale with the American one). Anyway, the landscape was gorgeous as you can seen on the panorama below.

But don't worry, I will not tell you about all my holidays adventures, I keep that for my close colleagues at lunch time, and it seems they have had enough of it with the two past days. Let's go to the point, I also noticed quite a number of brown pine trees, which surprised me as the spring and summer had been rather wet for the region so far. I asked some locals who told me it was due to the severed drought that happened last year in Provence, which happened during summer and fall 2017 and damaged mainly the pine forest, particularly where the soil root zone is thin due to the presence of rock.Of course, I have checked what I had seen on the ground with Copernicus Sentinel-2, using the Level 2A products from Theia. Let's first introduce the place names with the most recent clear image at the time of writing. 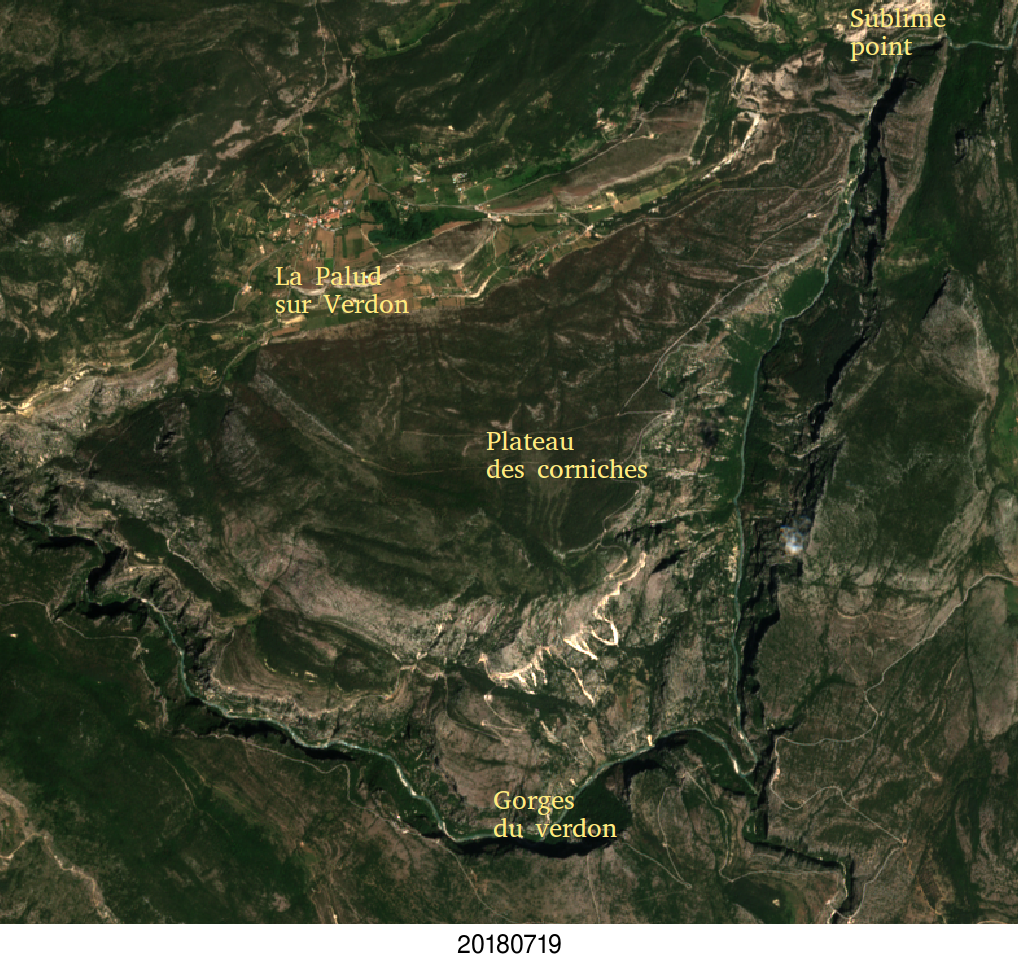 It is also interesting to have a look to the OSO landcover map derived by CESBIO in 2017 from Sentinel-2 data. It shows that the Plateau des corniches is mostly covered by Coniferous trees (dark green) apart from a few patches of deciduous trees (green) and meadows (light green). While around la Palud, we have mostly meadows. 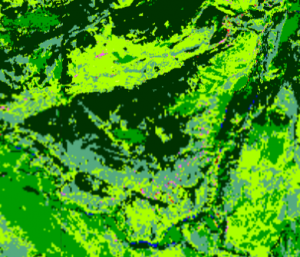 In the next images, I displayed an animation using the clear images taken close to end of July in 216, 2017 and 2018. I used both a true colour composite (R;G, B)=(Red, Green, Blue) and a false colour composite (R G, B) = (SWIR, Red, Blue), which shows very well the differences in vegetation vigour.

The  "plateau des corniches"  is much browner in 2018 image than in the previous years, showing a much dryer vegetation. The 2017 image was taken just at the beginning of the drought, and its effect were hardly noticeable yet. Conversely, near the village of La Palud sur Verdon, the meadows are much greener in 2018 than in 2017 thanks to the wetter spring. One can also note that the Verdon river bed is much brighter n 2017, showing a lower water level.The false colour animation shows the same effects, but reveals another one, the patches of deciduous trees on the plateau have also suffered from the drought. I had not seen that from the ground, but these trees were far from where I walked, and my near-infra-red detection capacity is very bad.

So, I hope no one will crack a match on the route des corniches when the wind blows.