Every four years, CNES brings together its scientific advising committees (and I have never been invited 🙁 )  for its scientific prospective seminar. This seminar is where the scientific priorities for CNES’s next space missions are defined. A few months before, a call for ideas for new missions is issued, and it was the opportunity to submit the idea of a mission called SENTINEL-HR (following Gérard Dedieu who had already proposed it two years ago).

The land advisory comittee recommended to study the Sentinel-HR in a phase zero, and we hope to start soon mission studies. 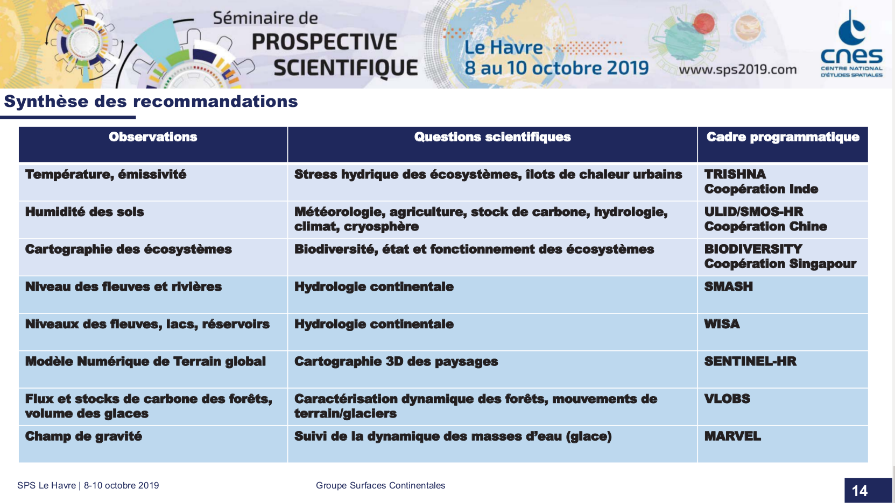 In addition, as part of our studies for the preparation of the new generation of Sentinels, we were 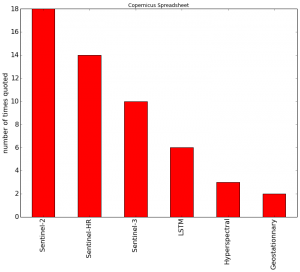 able to analyze the results of the major survey conducted by the Copernicus program with hundreds of users. We found that the demand for a mission such as Sentinel-HR appears frequently among users working for continental applications, as shown in the figure on the right.

The Sentinel-HR mission should make it possible to observe all the lands at a metric resolution once a season. Taking into account the clouds, it would require a systematic revisit frequency of 20 to 30 days. As the mission name suggests, access to data would be free and open. The minimum configuration would have four bands (blue, green, red, near-infra-red), with optional bands in the short wave infra-red and the possibility of making stereoscopic observations.

As I already presented numerous times and for many years,  the benefit of Sentinel-2 data, compared to the SPOT missions of the past, is the ability to make frequent and systematic acquisitions, coupled with the free and open availability of data. This clearly explains the success of the SENTINEL-2 mission, which brought the number of users each year from a few thousands for SPOT to tens of thousands for SENTINEL-2.

Of course, there are probably other smart solutions which will need to be studied, either with more satellites, or with a larger field of view. The most complicated point for Sentinel-HR would probably be data throughput. Currently, SPOT6/7 only acquire a few minutes of orbital shooting, whereas it would take up to 20 minutes for Sentinel-2. Setting up a stereoscopic shot with an angle difference of about 10 degrees would not be easy either, but our instrument designers will probably have good ideas.

As for Sentinel-2, the applications would be very diverse.

Here are a few of them :

If you are interested by the Sentinel-HR mission, please feel free to tell us, by commenting this post. We are interested in your reasons, and we will need application examples to promote this idea. And maybe, if you do it well, i’ll get invited to CNES’s prospective seminar ;). Of course it will be a long time until we get such a mission,  probably too expensive for CNES alone. But submitting this proposal will maybe allow to start studying it and make the idea progress.

The proposal was submitted with several co-proposers :