A chaotic attractor was obtained from satellite remote sensing data for the first time in 2011 giving a strong argument for chaos in real environment. This result has a special sound today May 20th 2020, since it is the 80th birthday of Otto E. Rössler — one of the fathers of the chaos theory — to whom a Focus Issue entitled « Chaos: from theory to applications » is opened for submission in Chaos: an Interdisciplinary  Journal of Nonlinear Science  to celebrate his birthday.

The first chaotic (and hyperchaotic) attractors (Lorenz-1963, Rössler-1975, -1976 and -1979, Ueda [1-5]) and maps (Gumowski-Mira-1968, -1973, Hénon-1976, Lozi-1978, Rössler-1979 [6-9;4]) were based on theoretical developments (see reference [10] for a historical perspective). Their dynamic is said chaotic since it is — at the same time — deterministic and unpredictable at long term. This can be considered as a major epistemological rupture: after the definition of determinism given Laplace in the early 19th century, such an association (determinism and unpredictability) was completely unexpected.

After such an unexpected theoretical result, important experimentations were carried out in the 1980s to investigate if such a paradoxical situation could be met under experimental conditions. The work by John Hudson and his group are among the most notable and important ones, which gave a definitive proof of experimental chaos (see [11] for historical details).

To detect chaos in real environmental world was another difficult challenge. Various algorithms have been developped to detect some of the properties of chaos but most of the developments were not able to ensure the presence of all the properties of chaos at the same time. In particular, very few methods were proven able to detect determinism. The global modelling technique enables to obtain sets of equations directly from observational time series. It is one of the rare approaches able to capture the whole — dynamical, geometrical and topological — properties of chaos in a single synthetic algebraic and deterministic formulation.

The global modelling technique was applied to the cycles of cereal crops in North Morocco, considering vegetation index aggregated on a large region. A chaotic model could be obtained. It is plotted in Figure 1. It is one rare example of a chaotic attractor directly obtained from real environmental conditions; and it is very likely the first chaotic attractor directly obtained from satellite remote sensing data. Therefore, it makes sense to remind this result on the multitemp website today. 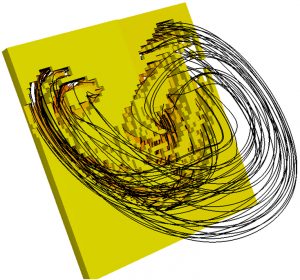 To celebrate Otto’s 80th birthday, it was decided to prepare the Rössler cake ! (more precisely, the Rössler-1976 cake!), that is, a cake diffeomorphic to the Rössler-1976 attractor. To do so, we did refer to the receipe of the Bûche de Noël. You are free to interpret the choice of this receipe as a kind of messianic choice (hou!). But one should not forget two other useful arguments. One argument relies on physics: the paste of the bûche de Noël is well adapted to apply smooth foldings and the chosen attractor has at least a single folding in its simplest regime. Another argument is a personal argument: it is a cake the author is able to cook because he has to prepare it each year (familly obligation, no matter what!), at the purposive date (by the end of December). The result we got is shown in Figure 2. 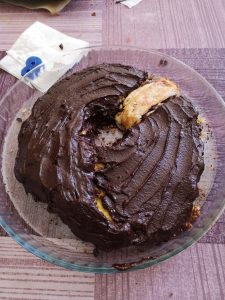 Figure 2: Prototype of the Rössler cake — topological reconstruction of the 1976 version — with its Poincaré section (top panel). The cake is bounded by a genus-1 torus (there is a single hole in the center). The paste flow is characterized by a positive first Lyapunov exponent (just consider the diverging trajectories in the right bottom part of the cake, we must admit we were not able to derive the Jacobian matrix from the paste flow) and by a single folding (in the left bottom part) which is a necessary condition for chaos. The Poincaré section to the cake (golden brown colour on the upper part of the cake) was cooked separately: this trick was used to get the proper structure for the Poincaré section to the cake! In this sense, this cake is not exactly a reconstruction of the Rössler-1976 attractor, but, more to the point, a topological suspension of the Poincaré section to the Rössler-1976 attractor, hooo! The cooking receipe was previously explored theoretically [15-16] considering the bidimensional chaotic map introduced by Hénon in 1976 [8] and the three-dimensional walking stick hyperchaotic map introduced by Otto in 1979 [4]. The original Rössler attractor is also provided (bottom panel) for visual validation.

FIGURE OF THE POINCARE SECION STILL TO BE ADDED BECAUSE I BIT IN IT BEFORE TAKING THE PHOTO… I’LL HAVE TO COOK IT AGAIN!

Figure 3: Poincaré section to the Rössler cake. A careful look at it should enable to detect several iterations of the horseshoe map [17].

Because of the current travelling restrinctions due to the epidemic of Covid-19 (see the GPoM-epidemiologic Bulletins), it was unfortunately not possible to share the taste this cake practically with Otto. But we could share its frendship taste with him and other friends virtualy during a somehow surealist video session. 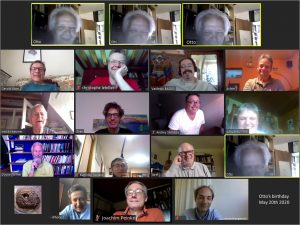 Figure 4: Video session on May 20th 2020 at 5 pm (German time) with Otto Rössler and several friends of his (Gerold Baier, Vasileios Basios, Niels Birbaumer, Sven Sahle, Andrey Shilnikov, Ursula Kummer, Doyne Farmer, Kunihiko Kanako, Lars Folke Olsen, Plamen Ivanov, Johachim Peinke, Achim Kitell, Christophe Letellier and  myself) to celebrate his 80th birthday. Reimara Rössler did also briefly appear during the session. Christian Mira could not participate to the session but told us he will send a message to Otto by email. At the end of the session, one of us recalled us that Konrad Lorenz, with whom Otto was close to, did consider Otto as an astonishingly promising young researcher; He was right! This session was kindly organized by Gerold Baier on a suggestion by Christophe Letellier, thank you so much. The birthday photo was recomposed from different screen copies by Vasileios and myself (thank you Vasileios) in order to have everybody on the same picture, and with a joyful  face (actually we had special expressions when the connection was getting bad. But we could manage!). This celebration was an opportunity for me to wear my Vinod Gaur tie (friendly awarded by Vinod himself in 2017, I could even choose the color).

This cake reconstruction of the Rössler-attractor enabled us to unveil a new property of this chaotic attractor: this attractor is not just an attractor of simplest possible structure (characterized by a single folding); it is neither just a very beautiful attractor; It is also a (potentially delicious) frienship attractor.

Invitation to submit to special focus

We are pleased to announce the forthcoming publication of a new Focus Issue entitled “Chaos : From Theory to Applications” in Chaos : An Interdisciplinary Journal of Nonlinear Science to celebrate the 80th birthday of Otto E. Rössler.

Otto submitted his first paper on chaos in 1976. The Rössler system quickly became one of the prototypes on which the paradigm of chaos theory is constructed. He also introduced hyperchaos and suggested a classification of chaotic attractors. Otto E. Rössler investigated applications of chaos in various fields : chemistry, heart rhythm, biology, electronics, astrophysics, fluid mechanics.

In order to celebrate his contribution to chaos theory, and in honor of his 80th birthday, this forthcoming focus issue in Chaos is devoted to showing how chaotic behaviors help to understand the reality of the world in its complexity. Contributions should try to show how the concepts of state space, attractor, first-return maps Poincaré sections, bifurcations, etc. allow for better views of the possible dynamics produced by simple as well as complex systems. Contributions can be either theoretical, numerical or experimental.

For those who met Otto E. Rössler and who would have particular recollections, we offer the opportunity to contribute to a co-authored paper in which each contributor will write about one half or one page (possibly with one picture or one figure) for providing to the community how Otto was perceived along his career. For this type of contribution, please contact Christophe Letellier.

This Focus Issue is scheduled for publication in December 2020. All submitted articles should conform to the Chaos author guidelines. Please be sure to write a lead paragraph – see guidelines for more detail. Papers will be published immediately after acceptance and will available online in the journal and in a virtual collection dedicated to this Focus Issue.

Your submission should be sent by AUGUST 21, 2020 (extended date). It will be reviewed within 4-6 weeks of submission.