Completion of the processing of LANDSAT 8 Level 2A products taken above France in 2013.

That was fast ! The processing of all the LANDSAT 8 images taken above France in 2013 took less than 15 days. The first LANDSAT 8 images were taken in April 2013. The MUSCATE team processed the data for the THEIA land data center, using CNES computing center. A few more days will be necessary to upload the data on the THEIA website and to check that the data are correct. Finally, the longest part in the processing is the downloading of the input Level 1T products from USGS earthexplorer website (equivalent to the Level 1C in THEIA's nomenclature) 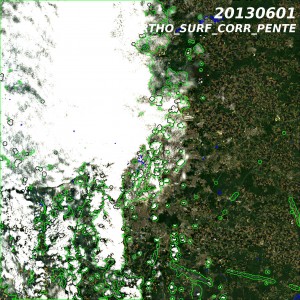 . The Level 2A data quality is quite good, as may be seen on the browse products on the right, as shown by images on the right, which come from the times series obtained on the tile of Paris. As usual on this blog, the clouds are circled in green, the shadows in black, the snow in pink and the water in blue. A few clouds are sometimes missed by our multi-temporal method, when the repetitivity of cloud free acquisition is too low, as in the image on the right which was acquired during a cloudy spring. The following images in the time series are not affected by this kind of defect. This paper aims at describing the main steps of the processing. 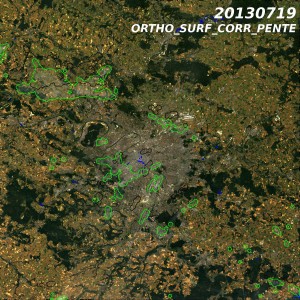 We download the input data from the earthexplorer website, using an enhanced version of the script described here. These products are ortho-rectified by USGS, using a global data base of ground control points. The location requirement for LANDSAT 8 is 50 m, which seems to be met by the L1T products. We found location errors around 1.5 pixels near Toulouse, but most regions seem to have better performances. USGS confirmed a 38m bias Southward near Toulouse and will try to correct them. 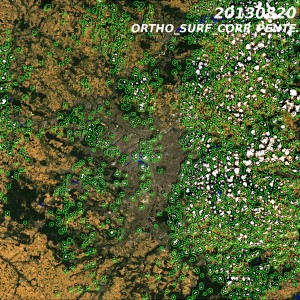 Our processing does not correct for these small errors, and the next version of the USGS LANDSAT 8 processing only wil lcorrect for this bias. Regarding LANDSAT 8 absolute radiometric calibration, we use the coefficient values recommended by LANDSAT 8 and provided with the L1T products. 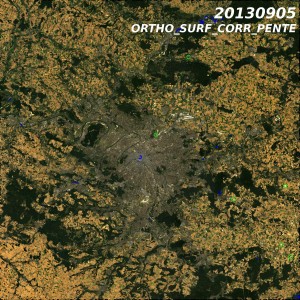 Level 1T data are provided with the UTM projection. This projections uses three different zones over France, for which the registration of data is not direct. We decided to resample the data on a Lambert'93 projection, which is the official French projection. 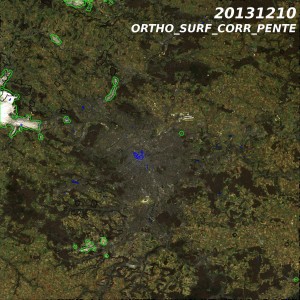 1,1) tile is in the SouthWest corner of France. The tile of Toulouse is the 5th to the West, and the 2nd to the North. It is named D0005H0002 (D for "droite", H for "Haut") For Corsica, a different tiling made of 2 tiles was defined. For each tile, we provide the whole set of dates for which a LANDSAT 8 image intersects the tile. A few date may be missing, for several reasons, in general related to the cloud cover :

First of all, we would like to outline that our processor does not process the themal bands of LANDSAT 8.For the visible, near and short wave infrared bands, we use the same method as for SPOT4(Take5). It involves also the MACCS processor, developed and maintained by Mireille Huc at CESBIO. It is based on multi-temporal methods for cloud screening, cloud shadow detection, water detection as well as for the estimation of the aerosol optical thickness. However, thanks to LANDSAT 8 spectral bands, our processing was enriched compared to SPOT4 (Take5) : LANDSAT8's 1.38µm band enables an enhanced detection of high and thin clouds. And thanks to the blue band, we have an additional criterion to detect the aerosols, thanks to the quasi constant relationship between the surface reflectances in the blue and in the red above vegetation. The precision gain due to this criterion compensates for the precision loss due the lower repetitivity of  LANDSAT8 images.

Level 2A images from Paris's tile, from 3 different LANDSAT 8 tracks (From left to right, tracks 200, 199, 198). The viewing angle differs as the image is from the west on the left image, at nadir in the center and from the east for the right image.

To enhance the cloud screening accuracy, we decided to use the data from adjacent satellite tracks within the same time series. These data are not acquired under exactly the same angle (+/- 7 degrees), which is the assumed by the multi-temporal method, but the difference is small enough to allow a large accuracy gain due to the enhanced repetitivity. However, because of this approximation, a few artefacts may be observed. For a greater enhancement, we might also use LANDSAT 7 and LANDSAT 8 data in the same time series, but we will implement that later on...

For LANDSAT 8, we used the same format as for SPOT4 (Take5), excepted a few details, that I will describe soon...