Several colleagues asked me about the apparent defect on the maritime part of Sentinel-2 first image.  I would like to reassure you, it is not a defect, only a directional effect. Let's explain it :- For each Sentinel-2 spectral band, 30 000 elementary detectors are necessary to obtain a field of view of 300km with a resolution of 10m. But the current technology does not allow to provide 30000 detectors in a row. What is used are 12 linear arrays of detectors, which are put together to cover the whole field of view. But as each linear array is surrounded by an edge, it is not possible to stitch the pieces together with no space between the linear arrays. It was decided to shift the 10 pieces within the focal plane, as in the drawing below. The odd chips are looking forward, and the even chips are looking backward, with angle differences that may reach 3 degrees for some bands.

On Sentinel-2A first image, we observe the see surface with the specular reflection of the sun on the sea surface (also called sunglint).  Such a phenomenon tends to change quickly as a function of the viewing angle, as may be seen on the picture below. Bertrand Fougnie, at CNES, computed the amplitude of this effect as a function of the detector, for different wind speeds. It is provided on the plot below, on which you can see the line breaks between the odd and even detectors. The plot is provided for different wind speeds. When the wind is low, the sunglint makes a small spot with a large variation with angle, which increases the effect. 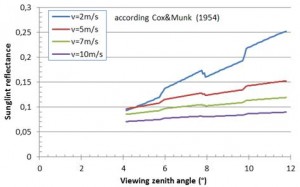 The "defect" we observe is therefore only linked to a difference of observation angle. This phenomenon is not at all visible above lands, because there, the directional effects are much lower except in some special cases (the "hot spot"), which should be avoided by Sentinel-2.. A few concerned users asked if that would prevent the use of data above ocean, but I do not think so. If one is able to remove the sunglint effect on the data, then one is able to account for the angle variations.