It is with a deep nostalgia that I learned that Formosat-2 has just been decommissionned, after some of its components broke down after 12 years of acquisitions (nominal life extended by 8 years !). When the satellite was launched, we were searching for data sets that would allow us simulate the features of VENµS satellite (which was then announced for 2008-2009, but still not launched yet 🙁 ) and of the « GMES continental » satellite which finally became Sentinel-2. We needed high resolution images with a frequent repetitivity under constant view angles. We were starting to use SPOT time series, limiting their view angles to +/- <10 degrees off-nadir, and we kept asking for the Indian OceanSat which was on the orbit targetted by Venµs (we never got any answer), when we first heard of Formosat-2. Formosat-2 had exactly the features we needed : 8m resolution, 24 km field of view, a one day repeat cycle (constant view angles !) and 4 spectral bands including the blue one which was lacking on SPOT.

With the help of Gilbert Pauc (a few months before he retired), CNES set up an agreement with SPOT Image and the Taiwan Space Agency, to trade Formosat-2 time series against radiometric calibration work from CNES. As a result, CNES took charge of Formosat-2 calibration for all its life (I started it, being still in CNES Image quality team), and we benefited from a few free time series and from a reduced price for the next ones (reduced but still expensive : 1000€/image). The first 3 time series we obtained were acquired in Morocco, and in Toulouse and La Crau, in France, in 2005-2006. And before summer 2006, with the help of Hendrik Trom and then Vincent Debaecker, we had produced our first cloud masks and aerosol optical depths with a new processor which later became MACCS, and we started showing some first application examples. (this website was redesigned in 2014, but its content was written in 2006). 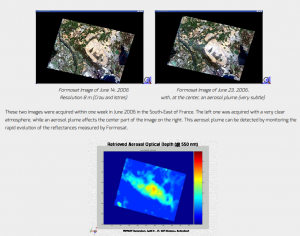