Irrigated crop maps for a better water management in agriculture

To classify irrigated farmland, within the growing period and at the scale of a territory, we focused on the use of optical remote sensing images. In the lines below, I will introduce the work to generate maps of irrigated crops usin Landsat-8 time series level 2A made available by Theia Land data center.. 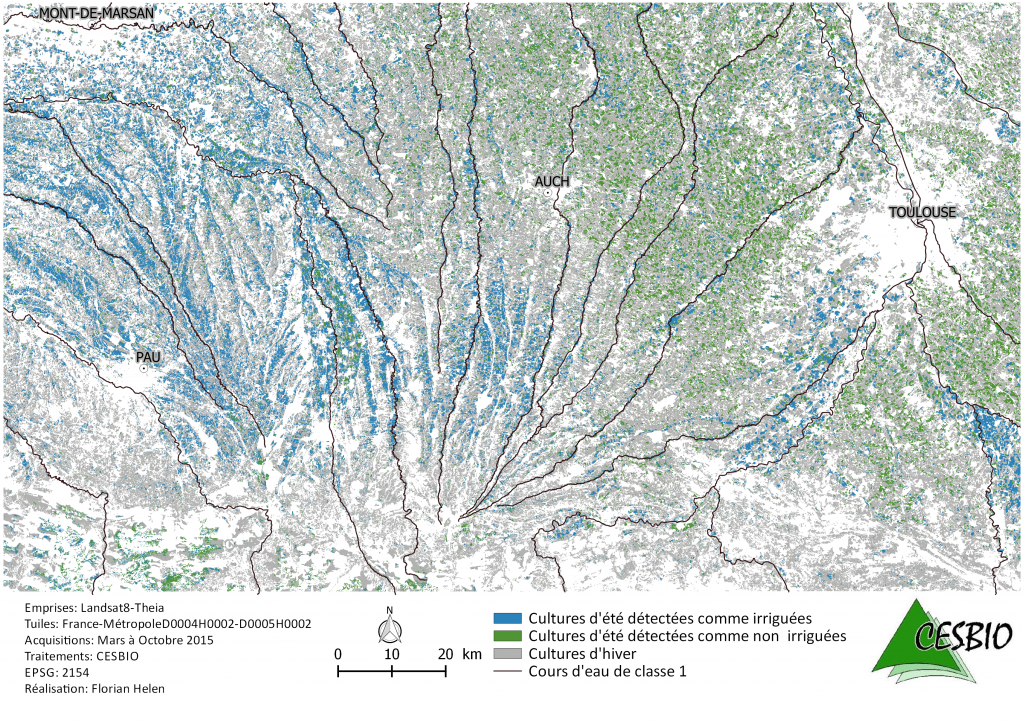 The study area chosen for this work is mainly managed by the Compagnie d'Aménagment des Coteaux de Gascogne, who is a partner of CESBIO in MAISEO and SIMULTEAU programs.The site  spatial extent includes two of Theia's Landsat tiles, for a total area of almost 2.4 Million ha. Within this area, the main crops cultivated in summer are: 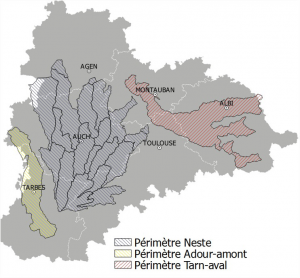 To perform our study, we set two lines of work:

To do this, we used the automated classification chain Iota 2  developed by Jordi Inglad's team at Cesbio . Before making our tests, we connected the tool to the laboratory database that centralizes remote sensing images used in research projects as well as in-situ data. The joint use of the database and Iota 2 chain can easily make classifications at different spatial and temporal scales. The learning in-situ data come from plot surveys made by Claire Marais-Sicre and Marjorie Battude during the field season of 2015. We have 1332 samples for training the classifier and validating the thematic maps with  the following nomenclature:

The processing chain  we have built to produce irrigated crop maps is divided into two stages:

In the first phase of our process, we used the Iota2 processing chain trained with samples to produce a classification according to our nomenclature. Then we applied the summer corp mask. Based on a threshold of multitemporal NDVI indices, the summer crops can distinguish very early in the season (early June) summer crops. At the end, we get a thematic image that provides the spatial distribution of irrigated crops, non-irrigated crops and winter crops in our study area.

Classifications at the end of irrigation season

It is clear that the use of images acquired after the end of irrigation season does not brung much improvement compared to the map obtained end of August.

Classification during the irrigation campaignWe focused on two periods:

Classifications performances are lower than those obtained for the end of the campaign but are still quite correct. Indeed with 24 and 27 images introduced in Iota chain 2, we still get an overall accuracy of respectively 85.3% and 85.4% for the two identified periods. Irrigated area estimationKnowledge of the spatial distribution of irrigated crops and estimated irrigated area, often unknown to the community, is an important issues for water managers. Until 2009, irrigation intentions  were synthesized in the Land Parcel Identification System, known as Registre Parcellaire Graphique (RGP) in France, but this is no longer the case. Now, with our map  we are able to estimate the irrigated areas at different scales (region, state, watershed, etc.).In 2015, we estimate at nearly 195,837 ha  the sum of irrigated crops in the study area. According to the observations, with 85% of the irrigated area, grain corn is the main irrigated crop. Straddling the 3 departments of Gers, Hautes-Pyrénées and Pyrénées-Atlantiques, the watershed of the Adour-upstream is particularly affected by irrigation. Indeed, it occupies almost 13% of the total watershed (with about 16 800 ha of maize and 1600 ha of soybeans). Although the results seem satisfactory, room for improvement remains. Indeed, estimates of crop surfaces of the Gers and Haute Garonne departments show:

The analysis of the confusion matrix indicates that there is confusion between irrigated corn and soybean pixels. To improve the quality of our thematic maps, new work opportunities are open to us:

For nearly six months, Oliver Lienhard, who did a training period at Cesbio in the Casdar SIMULT'EAU project, worked on the classification method of irrigated crops under the supervision of Valerie Demarez and Frederic Baup. His internship key purposes and its first results on the contribution of radar that will be presented soon.