As for LANDSAT 8 a few weeks ago, we just produced the level 2A products for the LANDSAT 5 et LANDSAT 7 data acquired above France from 2009 to 2011. This data set will be released in a few days, when its transfer to the distribution server has ended. The MUSCATE team took charge of the processing for the THEIA Land data center, using CNES computing center. The data will be available on the following site :

The processing methods and the data format are similar to the LANDSAT 8 data set described here. However there are also a few differences which are detailed below :

The starting point is not the same for LANDSAT 5 and LANDSAT 7 : 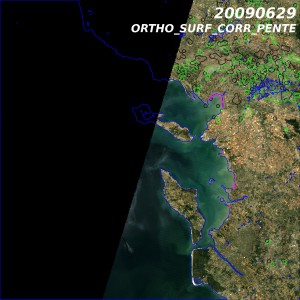 Level 1T data are provided with the UTM projection. This projections uses three different zones over France, for which the registration of data is not direct. We decided to resample the data on a Lambert'93 projection, which is the official French projection. Of course, the LANDSAT5 have been directly projected in Lambert 93. 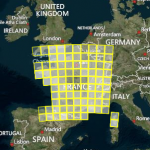 We chose to tile the data in 110*110 km tile s spaced with a 100 km interval, as it will be done for Sentinel-2. The (1,1) tile is in the SouthWest corner of France. The tile of Toulouse is the 5th to the West, and the 2nd to the North. It is named D0005H0002 (D for "droite", H for "Haut"). For Corsica, a different tiling made of 2 tiles was defined. For each tile, we provide the whole set of dates for which a LANDSAT 5 or 7 image intersects the tile. A few date may be missing, for several reasons, in general related to the cloud cover :

First of all, we would like to outline that our processor does not process the themal bands of LANDSAT For the visible, near and short wave infrared bands, we use the same method as for SPOT4(Take5). It involves also the MACCS processor, developed and maintained by Mireille Huc at CESBIO. It is based on multi-temporal methods for cloud screening, cloud shadow detection, water detection as well as for the estimation of the aerosol optical thickness. However, thanks to LANDSAT spectral bands, our processing was enriched compared to SPOT4 (Take5). Thanks to the blue band, we have an additional criterion to detect the aerosols, thanks to the quasi constant relationship between the surface reflectances in the blue and in the red above vegetation. The precision gain due to this criterion compensates for the precision loss due the lower repetitivity of  LANDSAT images. Finally, as there is no 1.38 µm band on LANDSAT 5 and 7, the detection of high clouds is much less easy than for LANDSAT 8.

Images of one of the Atlantic Coast tiles, coming from different LANDSAT Paths (left and middle, tracks 201 and 200). The viewing angles are slightly different as the left image was observed from the West and the rmiddle image from the East. On the right, a Landsat7 image from track 201 reduced to its central part.

To increase repetitivity of observation which is essential in our multi-temporal method, we decided to use time series that merge LANDSAT 5 and LANDSAT 7 data as well as LANDSAT 5 data coming from adjacent tracks. As these data are not observed under the same viewing angle (+/- 7 degrees), but the angle difference is small enough to increase precision on the overlap zones, even if it may cause the appearance of artefacts in the AOT images.

Here is a little list of known defects for THEIA's LANDSAT 5 and 7 L2A products :

- reference data for ortho-rectification at USGS may be biased by more than 30 m (38 m in Toulouse). The Landsat 8 data could be misregistered with the LANDSAT 5 data ortho-rectified at CNES using a national geographical reference.- LANDSAT 5 TM instrument electronics have an "afterglow" issue, that causes the appearance of whiter stripes perpendicularly to the satellite track near very bright zones such as a large cloud.- ESA's LANDSAT 5 products have some random bright spots that appear as colored spots in color composites.- in LANDSAT products, the "nodata" value that tells if a pixel is outside the image is 0, which is also a value observed within the image. Sometimes pixels may be identified as nodata when the are in fact within the image. It happens mainly over sea, where the medium infrared reflectance is often equal to zero. In this case, all the bands have the nodata value which, in our products is -10 000, to avoid the same difficulties for subsequent users.
Traduire