MACCS (Multi-sensor Atmospheric Correction and Cloud Screening) is a level 2A processor, which detects the clouds and their shadows, and estimates aerosol optical thickness (AOT), water vapour and corrects for the atmospheric effects. The processor was jointly developed by CESBIO and CNES. CESBIO developed the methods and a prototype, while CNES funded the operational version of the processor, with a strong support from CESBIO for the validation. More recently CNES+CESBIO and DLR joined their efforts to develop a joint processor named MAJA, for MACCS-ATCOR Joint Algorithm. MAJA is an evolution  of MACCS, in which a couple of methods inspired by ATCOR software have been added. MAJA V1_0 could have been called MACCS V6.0, but we wanted to celebrate the association of both entities with a new name.

MAJA’s distinctive feature is its dedication to high resolution time series and its wide use of multi-temporal methods. For this reason, MAJA can only be applied to the optical missions which observe the earth under constant viewing angles. It is the case for Sentinel-2, VENµS, LANDSAT and Trishna satellites.

There are several ways to acces to MAJA itself or to its products: 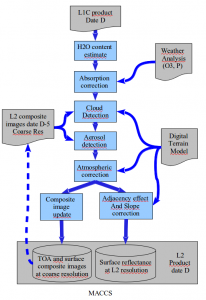 A short description of MAJA

The following ATBD document provides a detailed description of the methods used in MAJA. But if you lack time, here is a much shorter description. MAJA is briefly described in the joined figure. The text below provides some information for the main boxes.

In the case of Sentinel-2 and Venµs, which include a water vapour channel at 940 nm (resp. 910nm) in a strong water vapour absorption band, a first step consists in estimating the atmospheric water vapour content. For the other satellites, weather analysis data can be used. After that, the processor can correct for the gaseous absorption using the SMAC model.

The next steps deeply involve multi-temporal methods. Of course, to do that, a time series must be processed in chronological order. After each processing, a composite image is updated with with the unclouded pixels from the processed date. This composite image is used as a reference for the cloud detection and the AOT estimate.

Our cloud detection method is based on a large number of tests, the most efficient of which are :

Having detected the clouds, we can proceed with the detection of  cloud shadows, water, and snow.

The cost function evaluation is evaluated using neighbourhoods of coarse resolution pixels (240m), spreading over 2 kilometres. The obtained AOT images are then smoothed, the gaps are filled to obtain finally an AOT map with a 5 km resolution. The aerosol type is not estimated, it is a processing parameter which can be fixed per geographic region.

Once the AOT is known, we can retrieve the surface reflectances. To do that, we are using look-up tables (LUT) which are computed using the SOS radiative transfer code (Successive Orders of Scattering, Lenoble, 2007). These LUT are also used in the AOT estimation. The surface reflectance of the cloud free pixels obtained there are used to update the composite image, which will be used for the processing of the next image in the time series. Before editing the output product, we still need to correct for two other points, already described in this blog : the adjacency effects and the effects of terrain slopes on the illumination.

MAJA development started in 2005, and the contributor list is starting to be quite long :

For more details, we have published 4 papers about MAJA’s methods and validation :

20 thoughts on “MACCS/MAJA, how it works”