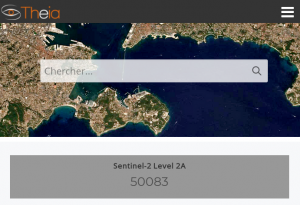 Since it became operationnal in December last year, MUSCATE has produced 50 000 level 2A products from Sentinel-2A. Let's recall what has been processed so far :

Map of the 650 tiles currently processed in near real time (in red). The blue tiles will be added beginning of next year.

All these products are available from https://theia.cnes.fr Let's recall that MUSCATE uses the MAJA L2A processor, which uses multi-temporal criteria to perform a high quality cloud detection and atmospheric correction. Despite the recent installation of version 2.4, MUSCATE still regularly suffers from instability as soon as CNES High Performance Computer is overloaded. The problem does not lie in MAJA, but in the information exchanges between all the components of MUSCATE which need to respect an accurate timing (sorry, I am not able to explain better). The exploitation team just installed a new version of MUSCATE (v 2.4.16.p2 (!)), which is expected to increase stability. But that's the theory, let's see if it works in the coming days and if we are able to increase our production rate.