I started to look at landslides in satellite images when I saw this tweet by @RemotePixel:

Like floods, landslides can be quickly identified using a before/after image comparison. In the case of the Glacier Bay landslide I used this method with Sentinel-1 and Sentinel-2 to compute the area of the debris tongue (about 20 km², 10 km long).

But Sentinel-1 was not particularly useful since the Glacier Bay landslide was a dark slide on a snow covered glacier, so it was easy to map it using natural color Sentinel-2 images. These kind of landslides are called « supraglacial landslides » and can be found in Landsat or Planet images too. Hashtag #lessbears 😀

Although the Glacier Bay landslide was one of the most impressive landslide of the decade, it did not cause any damage. The most devastating landslides in the recent years occurred in Palu, Indonesia after an earthquake.

This animation astonished me but other sharped-eye scientists noticed the poor muti-temporal registration of the images..

I saw a better example from planet images. That's sad #Sentinel2 does not do as well. I hope accurate registration comes soon @CopernicusEU

… and even fixed it!

A @CopernicusEU #Sentinel2 satellite view of #Palu before and after the #earthquake.

Because geolocation inaccuracy makes it difficult to compare the two raw images, this animation stabilises the west side of the image to highlight the 5m+ relative shift along the fault: pic.twitter.com/Sa3aDKJNv4

Only a couple of days after the disaster, a surface displacement map made from Planet images was tweeted by @SotisValkan:

After the Kaikoura earthquake in New Zealand, it was also possible to see both the ground displacement and the landslides caused by the earthquake in the same Sentinel-2 image:

In the images above I used a false color band combination with the near-infrared band of Sentinel-2 to highlight the contrast between the detachment zone and the vegetation. Otherwise landslides in temperate regions can be difficult to see in natural colors:

Willow creek landslide by Sentinel-2. Imagery suggests that it occurred between May 11 and 31 @davepetley see here https://t.co/FdrYx1kTMP pic.twitter.com/Hyt3SUEhsi

Whereas, with the near infrared band even small landslides can be identified:

Most of my landslides tweets were inspired by the landslide blog, where the author Dave Petley often comments Planet images. However, Sentinel-2 is also very useful to make quick landslide analyses because of these characteristics:

Planet provide images with similar characteristics and even a better spatial resolution (albeit with a lower image quality). But a very important aspect of the Sentinel-2 mission is the open data policy of the Copernicus program and the availability of efficient tools like the EO-Browser to explore the data with an Internet Browser.

Next part will be about glacier hazards! In the meantime here are more landslides..

"The landslide crossed the river Hítará, damming the river and causing a lake to form above the debris tongue" pic.twitter.com/RMV2uub6c5

Landslide in Norway from two #Sentinel2 images (about 3 ha are gone into the sea) pic.twitter.com/TaUuUIQa4m 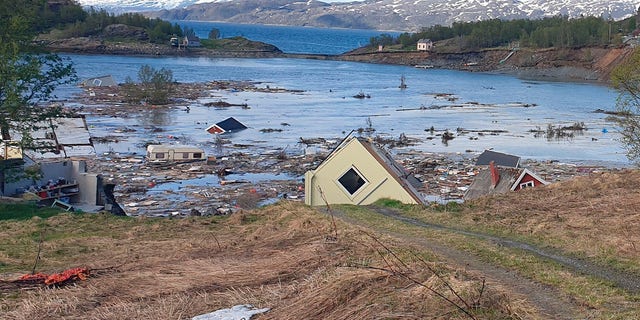