Don’t worry, everything is fine for SPOT5 (Take5) ! While SPOT5 is peacefully getting some well deserved rest, THEIA just reprocessed the Take5 data to solve a little list of issues detected after the first processsing. The data should be released very soon. The most significant change involves the cloud shadows mask computed by MACCS processor . The masking method was completely changed, from floor to ceiling. It is the last work done by Mireille Huc on this processor before leaving for other projects.THEIA’s users should be grateful to Mireille for all the excellent work she did on this method and software. Shadow detection is even more difficult than cloud detection, because dark zones are quite frequent in most landscapes, and are more frequent than bright zones. As explained in this post, MACCS detects the « potential » shadows via a threshold on the darkening of pixels, then checks if the « potential shadows » may be traced back to a cloud. 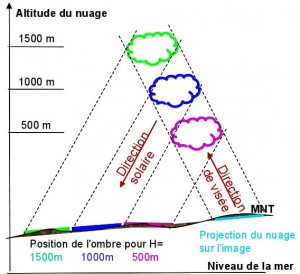 The previous version was roughly based on the following steps :

4. This altitude H0 is affected to all clouds and allows to compute the location of the shadows of all clouds an additional step was added to account for cases when all the clouds within image are not at the same altitude5. for all clouds :

This method worked quite well for small clouds, but could frequently fail for big clouds which masked a part of the shadow which lied beneath them. In this case, it was difficult to match the cloud and the shadow, as for instance in the image below : 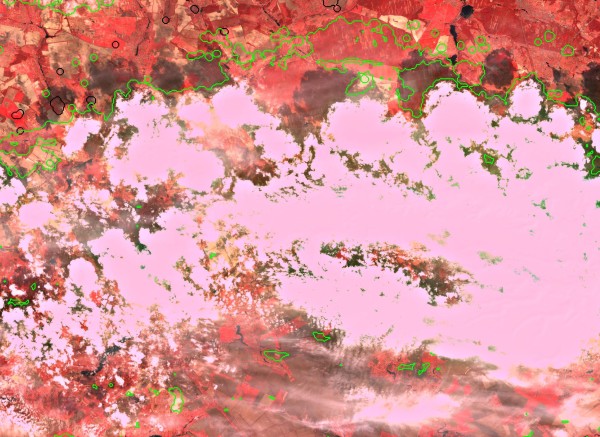 To avoid these issues, we have decided to stop trying to match directly clouds and shadows. The search of shadows in only restricted to zones where the detected clouds can cas shadows, and a final verification can solve the cases when the surface of the shadow is larger than the surface of the cloud.  The new version roughly works as follows :

1 – Clouds are detected2 – for each cloud, search zone where clouds between 500 10000m altitude can cast shadows

These images show the shadow detection from the previous version on the left, and from the new version on the right. Please click on the images to see them at a higher resolutions and observe the enhancement which is quite general. From top to bottom, the images come from Baotou, in China, Belgium and Central African Republic.

On the image edges, shadows may have been projected by a sneaky cloud which is hidden outside the image. Up to now, within the zone where this can happen, we used to only do a simple threshold on darkening, with a conservative value to avoid false detections, which led to frequent omissions. Here, Mireille added a clever improvement which consists in guessing the darkening threshold from the darkening of the shadows obtained in the middle of the image, where we are more confident in the shadow detection quality.

In this case (Baotou, China), the shadow in the North West corner, which was undetected by the previous version has been detected now. But, because of a bug found too late, as the production was already running, sometimes the processor omits the last shadow in the list, after running through the images from left to right and from top to bottom. It is the case for the last clouds within this image.

This improvement, first implemented in MACCS prototype, which is used to produce the take5 images, is also being used to process the LANDSAT images produced to level 2A over France since the beginning of 2016, but we will not reprocess the older data. The improvement is also being implemented within MACCS operational version 5.0 and it will be applied to Sentinel-2 within MUSCATE.

We were unable to solve the issue of the image below, for which the apparent shadow is in fact a black cloud due to the explosion of a petrol storage facility !