Beware, this document contains equations Radiometric quantities are numerous and may seem rather complex at first sight. Here is a little guide of the various quantities you might stumble upon when using optical remote sensing data. It might be a little boring, it is full-up with integral formulas, but well, to really understand what images mean, it might be useful. Come on, let’s go, and cheers !

The detectors of optical instruments are sensitive to the light energy they receive during an observation period. On a camera, the exposure time corresponds to the interval between opening and closing the shutter. On a digital observation instrument put on a satellite, there usually no shutter, and the term « integration time » is used more often: its duration is often fixed by the electronics of the instrument.The energy received is related to the properties of the observed scene, but also depends on many other parameters related to the instrument itself, which is not practical when, for example, comparing measurements taken by various Instruments. We shall define successively in the next paragraphs physical quantities which gradually allow us to free ourselves from these parameters depending on the instrument in order to obtain a characteristic of the surface observed only. This will require the definition of a whole series of physical quantities: the description of this series of magnitudes may be felt to be boring by students (and even by their professors …), but still it is necessary to understand what is observed.

The energy an instrument receives during integration time, with a sensivity S(λ) between [λ1, λ2] can be computed as in the following formula :

For a given wavelength, the spectral energy is the integral of the light power that reaches the detector during the integration time. The light power is called Spectral flux and is expressed in watts per unit length (often in W / μm)

As for energy, let’s define the equivalent spectral flux, using the following formula :

Developing this equation shows that the equivalent fluxes follow the same equation as the spectral flux :

The flux which reaches the instrument, is still far from representing only the optical properties of the scene we are trying to measure. It depends, for example, on the detector surface. To get rid of this parameter, it is necessary to introduce a new quantity:the irradiance.

The spectral irradiance is the spectral flux which reaches the detectrr per surface unit ds , it is therefore defined by :

Similarly, the equivalent irradiance can be defined by : 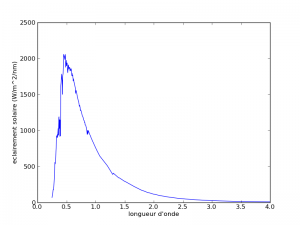 Solar illumination at the top of the atmosphere according to the wavelength. To my knowledge, the most accurate measure available today is that of Thuillier et al.

Irradiance is a useful quantity, but which still depends on the field of view of the detector. The narrower the field of view, the lower the irradiance. It also depends on the orientation of the detector with respect to the direction from which the light comes. For example, if the detector is oriented parallel to the direction of the photons, it will not receive light. Conversely, when the detector is perpendicular to the light direction, it receives a maximum irradance. To obtain a unit independent of the characteristics of the instrument, we will therefore have to define a new quantity (yes, one more …).

Spectral radiance is the spectral flux that reaches the instrument per unit area ds and per unit of solid angle dΩ, perpendicular to the surface of the detector.

The quantity d2G = ds. dΩ . cos Θ s is often used by opticians est and is named throughput. The spectral flux received on a detector whose surface is S and whose field of vue has a solid angle Ω can be written as :

As for the quantities above, the equivalent spectral radiance is defined as :

When throughput is small, which is usually the case in remote sensing, we get  :

The radiance is a unit widely used in remote sensing, since it combines several advantages:

Using the above equation, we get :

FInally, the equation may be rewritten as :

where A is a constant for a given instrument, that we name absolute calibration coefficient.

For wavelengths under 3 μm, the radiance of land and water surfaces come mainly from the reflection by the earth of the sun irradiance (except for some very intense light sources: projectors directed towards the satellite, lava flows (In the infra red medium) …). The radiance depends on  the sun irradiance variable, which depends on the distance between the earth and the sun (variable with the season), and is not therefore a property of the surface, the introduction of a new unit is necessary: it is the reflectance (It Is the last greatness to be defined here, we are at the end of the ordeal).The spectral reflectance is defined by :

And similarly, the equivalent reflectance is defined as :

The above formulation may come as a surprise at first, as one would have expected a much simpler formula, the reflectance being equal to the luminance divided by the illumination. The formula for defining reflectance comes from geometric considerations. The flux received on a surface depends on its orientation with respect to the light source. If the surface is perpendicular to the light rays, the flux is maximum, whereas if it is parallel, it becomes zero. This explains the presence of cos (θs) factor. The normalization factor π ensures that the reflectance is equal to 1 if the surface reflects the entire incident illumination towards the sky. To be convinced, it is sufficient to calculate the integral of the luminance reflected in all directions by a surface whose reflectance is equal to 1 (not forgetting that to integrate on the sphere, it is necessary to use the factor$$sin \theta_{s} d\theta_{s} d\phi$$ and not only $$ d\theta_{s} d\phi$$.

Reflectance is a property of the surface and does not depend on the instrument observing it or on the irradiance received. This reflectance, however, depends on the angle at which the surface is illuminated and observed and also, of course, on the wavelength. We sometimes use the spectral albedo which is the mean of the reflectance in all directions, or of the albedo, which is the average of the spectral albedo over the whole spectrum :

This time we are at the end of our troubles, and we have demonstrated that the measurements of our satellites are proportional to a property of the surface, the reflectance. It is in reflectance that the data Sentinel-2, or LANDSAT are expressed, although we had to discuss with the supporters of radiance. In fact, reflectance has many advantages :