Release of the first version of SPOT4 (Take5) data

Phew ! These last days were quite intense, but we did it (almost) ! We are very proud to announce that the first version of SPOT4 (Take5) will be released on Monday the 15th of July at the following site : https://www.ptsc.fr/en/products/spot4-take5. The data format is explained here. 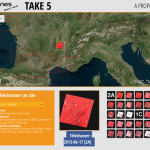 It will be possible to download the whole time series by clicking on 1C and 2A buttons. However downloading a whole series might take some time. Several small issues have been observed but not yet corrected (see this paragraph), but we still think it is useful that you start working on our data despite the few bugs that affect them. Downloading a data set requires the user to accept a licence. With the current version of the web site, you will need to accept this license each time you download a file.In our initial schedule, we had announced a distribution of data during the month of June, but we are just a bit late, and happy to have done it, accounting for the numerous tasks we had to fulfil.

The products on the data server should be considered as a preliminary version of the processing. Other versions will be distributed, because the data sets still have a few defects :

Finally, we want to draw your attention to the fact that SPOT4 data are coded on 8 bits and can be saturated. SPOT system uses a data base of histograms to determine the gains to use depending on the location and date. This database is far from perfect and saturated data are quite common. For sites resulting from the merger of several images, it is also possible that the saturation thresholds differ between the left and the right half of the site. We provide you, within Level 1C and level 2A products with a mask saturations that you really should use. Despite these few defects, we wish that this data set will be useful for you, and that you will obtain good results for your experiment and for your preparation for the arrival of Sentinel-2. Many of the SPOT4(Take5) team will leave for vacations in the coming weeks, this blog will b much less active as I leave today !