V1_0 was a preliminary processing performed with early version of MACCS adapted to Sentinel-2. It was plagued with a bug in the cloud shadow mask : when more than 255 clouds were present in one image, shadow detection went completely wrong and shadows were detected anywhere. V1_0 was not produced in MUSCATE operationnal context, but in an earlier validation context. Production was available over France only.

V1_1 replaces V1_0 over France, Production started mid November, but was only released in February because of many difficulties encountered by MUSCATE. It corrects for the bug related to cloud shadows observed with V1_0, and was fully processed by the operational MUSCATE center.

V1_2 was used in another context not related to MUSCATE, you will not find any product with this version number within MUSCATE server. [February 2017]

V1_3 was applied starting from February 2017, to data sets produced above Reunion, Burkina, Senegal, Tunisia, Morocco.The aerosol estimate is improved compared to V1_1. Together with Bastien Rouquié, from CESBIO, we worked on the tuning of the blue-red ratio which is used in the multi-spectral method to estimate aerosols (which is combined with a multi-temporal method). Initially, we used bands B2 (Blue) and B4 (Red), with a ratio of 0.45. We found out that better results were obtained with B1 (Blue) and B4 (Red), still with a ratio of 0.45. More accurate studies tend to recommend a higher value, closer to 0.5 As can be seen in the figure below, the estimates obtained with V1_3 are not biased anymore, and have a reduced standard deviation. As a consequence of getting a lower aerosol optical thickness, the surface reflectances of V1_3 products are 2% higher than those of the earlier versions (some user feedbacks from V1_0 said reflectances were sometimes too low).

[April 2017] V1_4 came with a better shadows mask, as it has been found that the shadows masks are too severe and contain too many commission errors.V1_4 with production date > May 2017 had a reduced dilation of clouds. The buffer was 480m before, and 240m after.

[February 2018] V1_5, and also V1_4 with production date > 2nd of February 2018 are back to a dilation of 480m. It was found that the AOT estimates are slightly degraded when the fuzzy edges of clouds are not included in the cloud mask, as it may be seen in the following graphs (left with a buffer of 240m, right with a buffer of 480m). 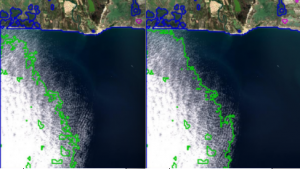 [March 2018] V1-6 The products with version 1.6 are processed with MAJA V2. They include slight improvements related to the implementation of a directional correction to better estimate AOT, and a refined high cloud mask. For more details, see this post.

The products with this version number have been processed with MAJA 2.1, which implements the cirrus correction. The cirrus orrection is only applied to pixel detected as high cloud and not thick clouds, and the corrected pixels are still flagged as clouds after correction, as our recommendation is to use them only after having checked them visually as the correction, which is generally good, is not always perfect and unveils the underlying shadows.

[September 2018] V1-9 We found an error on one of the parameters that governs the correction of adjacency effects. Adjacency effects are the consequence of the blurring brought by the atmospheric scattering. This blurring spreads over a neighbourhood. This effects spreads over a neighbourhood of a km radius. This radius depends on the atmospheric conditions but is not known well enough, and we keep it constant. Due to a confusion between radius and diameter, we used a 2km radius until version 1.9. the value has now been reduced to 1 Km.The effect of this error is moderate, but might be seen in very diverse landscapes.

[February 2019] V2.0 Even if the first digit of the version changed, this product version is similar interms of data quality, and format to version V1-9.  But behind the scene, a lot of things changed. We introduced MAJA V3.1, and changed MUSCATE to version 2.5. Before that, we had within MUSCATE and internal format which was different form the distributed format. Now they are the same, and they are also the same as MAJA native output. The main innovation in MAJA 3.x was the introduction of the use of Copernicus Atmosphere data to constrain the aerosol retrieval, but because of a remaining bug this option is not activated yet. It will be activated with MAJA 3.3 .