Sentinel-2B lifts off next tuesday

It is during the night of 6 to 7 of March that Sentinel-2B should leave Earth, from Kourou, on board of a European VEGA rocket 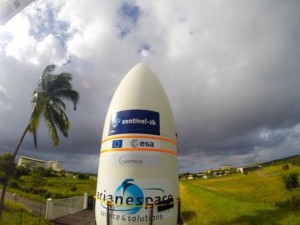 . The Sentinel-2 system will be completed at last, and after 3 months of commissioning phase, we will start to receive observations on the whole lands every 5 days, alternating between S2A and S2B observations. Well, this global repetitivity is still only true in theory, as only Europe and Africa are observed yet at each S2A overpass. The rest of the world is only observed every 20 days, which should become 10 days thanks to S2B. Initially, the Sentinel-2 system was suppose to rely on a satellite communication link through a geostationary relay satellite. But one needs an awfully complicated system to direct communications at 36000 km from a quickly moving satellites. Anyway, the Last ESA S2A mission status mentions :.

The acquisition scenario has been executed with an average of 14.8 minutes of MSIsensing time per orbit, Sentinel-2A is acquiring Europe, Africa and Greenland at10 days revisit. Since 22th February the 20-day revisit pattern has been introducedfor the rest of the world. It will remain in place until either the 4 X-band station orEDRS become available operationally, assumed towards late Q2/early Q3-2017.

So after nearly two years in orbit (one third of the satellite nominal life span), we are still in the so called "ramp-up phase". It is the same regarding the geometrical performances : to my knowledge, the L1C processor is still not able to take ground control points to ensure an accurate multi-temporal registration, down from 1.3 pixel to 0.2. This somewhat degraded performance results in a reduced apparent resolution of Sentinel-2 time series.. Anyway, despite the slowness of some progresses (we also have our own delays, see Muscate ground segment news), we should deeply thank the European Union, ESA, (helped by CNES and DLR) to provide us the earth observing system the land surface community (and CESBIO in particular) has long been dreaming of. Sentinel-2 brings an improvement of space resolution and time resolution by a factor 3 compared to LANDSAT, with an excellent image quality (incomparable to the fashionable new private constellations we are hearing of). At CESBIO, we started dreaming of repetitive optical eath observations with a high frequency in 1998, when Gérard Dedieu and François Cabot submitted the first proposal of Rhea project, which looked alike Sentinel-2, but with an ambitious one day repetitivity. Then, in 2000, we were defining a continental mission for the GMES program at CNES with a 3 days repetitivity. In 2003, we obtained the decision to start the Venµs program, with a repetitivity of two days, which was supposed to reach orbit in 2008 (even if  some sharp tongues were already forecasting a launch in 2009 or 2010 (finally, Venµs will be launched this summer, 2017...). At ast, in 2013 and 2015, we runned the SPOT (Take 5) experiments to prepare for Sentinel-2.. Overall, it is with a great pleasure that I will take part to the launch of Sentinel-2B, very late during the night from next Monday to next Tuesday (with champagne and croissants). Still, I still have some worries, not for the launcher reliability, but for the health of our professional twitter and die hard blogger, Simon Gascoin, who issues a new great post nearly each time Sentinel-2 acquires a new image. Will he be able to keep-up the rhythm with a second satellite ?