Snow cover duration in the Canadian Rockies from Sentinel-2 observations

Recently I generated one year of snow maps from Sentinel-2 in the Canadian Rockies for a talented colleague who is working on the numerical simulation of the snow cover at high-resolution with an exciting new hydrological model. The area is not covered by Theia, hence I used Start_Maja to generate the L2A products and then LIS to generate the snow masks on the CNES supercomputer (thanks!).

This area is quite challenging for snow optical remote sensing: the terrain is steep and there are a lot of forests. After processing this area, I also found some unexpected issues in the LIS processor, which need to be fixed, like turbid rivers detected as snow, or wildfires smoke detected as snow. I tried to use Pekel's water mask to remove the rivers and lakes pixels but there are some glaciers that are misclassified as water in this product hence I simply masked out areas below 2000 m. This eliminates most of the water surfaces but not all the forests, hence I used Hansen's global forest product to mask out pixels with a tree cover density larger than 50%.

With these snow products I computed a time series of cloud-free snow products by linear interpolation in the temporal dimension from 01 Mar 2018 to 01 Aug 2018 (154 days). From this stack I could compute the snow cover duration map, i.e. the number of days with snow for each pixel. This simple method provides an indicator that is similar but different to the "snow persistence" or "snow probability" i.e. for each pixel, the number of times that snow was observed divided by the number of clear-sky observations. The disadvantage of the "snow probability" is that it is weighted by the seasonal distribution of the cloud cover, therefore I prefer to work with the snow cover duration to reduce a time series of snow maps into a single map.

As a sanity check I often look if areas with high snow cover duration match the glacierized areas. Here I zoomed on Haig Glacier (50°43'N, 115°18'W) in Kananaskis Country and plotted the glaciers outlines from the Randolph Glacier Inventory 6.0:

As noted by Marshall (2014), "Haig Glacier is the largest outlet of a 3.3 km² ice field that straddles the North American continental divide", which means that melt water from Haig Glacier flows towards the Atlantic Ocean! 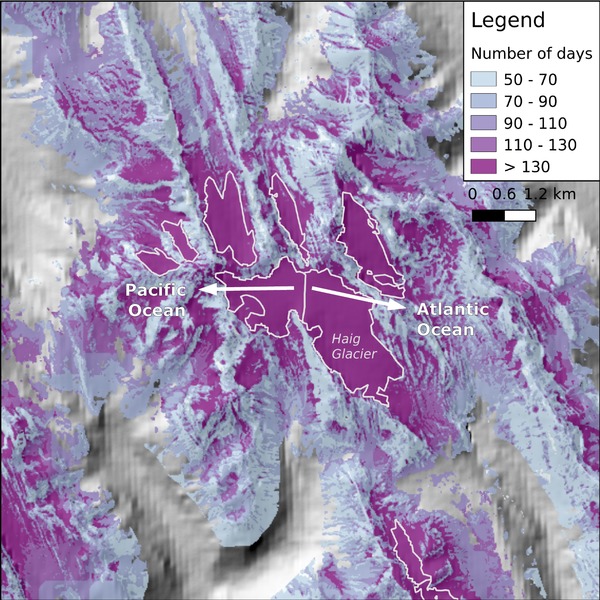