The SPOT4 (Take5) is already 3 months old and will only last for one month and a half. For the in-situ measurements among the users teams, there is also only one month left.

On that occasion, we just created a quicklook page that shows all the images acquired between January the 31st and April the 15th.

With the help of Vincent Poulain (of Thales, funded by CNES Image Quality service (thank you!)), large improvements have been made on the settings for ortho-rectification SIGMA software, in order to eliminate much of the poor correlations that disrupted our measurements. With the exception of two very uniform rainforest sites (Borneo and Sumatra), the registration performance for all sites are now excellent. Selection thresholds are however a little too strict for two other rainforest sites (Gabon and Congo), where most images are rejected. The work is going on… 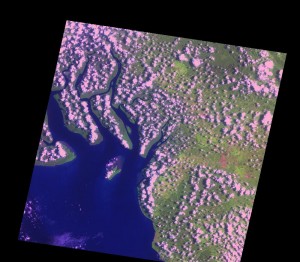 In this April 6 to Cameroon picture, one of the rainforest sites, whose ortho-rectification was greatly enhances, small cumulus clouds are present at above the ground and not above the sea If a meteorologist passes by, an explanation of this phenomenon frequently encountered would be welcome .

Despite very bad weather in many places, especially in France early this year, SPOT4 managed to take some beautiful pictures without clouds on almost all sites. The quick-looks from images clear enough to be ortho-rectified are now available on this blog. On many of these sites (in Brittany, Alsace, Sumatra, China), it will require using partially cloudy images to obtain a correct repetitivity. You may judge for yourself that the repeatability of 5 days is absolutely necessary (in some cases even a little insufficient) to properly monitor vegetation growth.

On CNES side, the Take5 production center was installed on April the 30 th. The official production can start (I guess we’ll have to experiment to configure all the settings). The  distribution served of the French Land Data Center is also ready. It is just waiting for the opening of its domain name (ptsc.fr), that requires a few signatures. A special data server for Take5 is also being finalized. The next weeks will be busy, but the data should be released in June as planned.
Finally, CNES and Astrium have agreed on a very liberal license for SPOT4(Take5) data, that should be issued in the coming days.