At last! We announced it in March 2020, and here it is, one year later! From lock-downs to constraints related to crops grow stages or soil wetness, we have been forced to postpone the operations several times. And finally, the ROSAS* Lamasquère (South-Western France) station sent its very first measurements on March 17, 2021.

Let us recall that the ROSAS protocol is based on the use of a multi-spectral photometer to carry out not only angular and spectral measurements of the incident radiation, but also of the radiation reflected by the surface. It is thus possible after processing to deduce the bi-directional reflectance (BRDF) of the surface of the measurement site. With the CNES ROSAS stations in La Crau (France) and the CNES/ESA station in Gobabeb (Namibia), the CESBIO Lamasquère station is the third site of its kind in the world, and the first to characterize an agricultural vegetated surface, with seasonal and inter-annual variations of the cover.

This station will allow us to validate the satellite surface reflectances (corrected for atmospheric effects) in difficult cases, since :

Feel free to refer to our previous article to read the detailed motivations that led us to set up this new site. 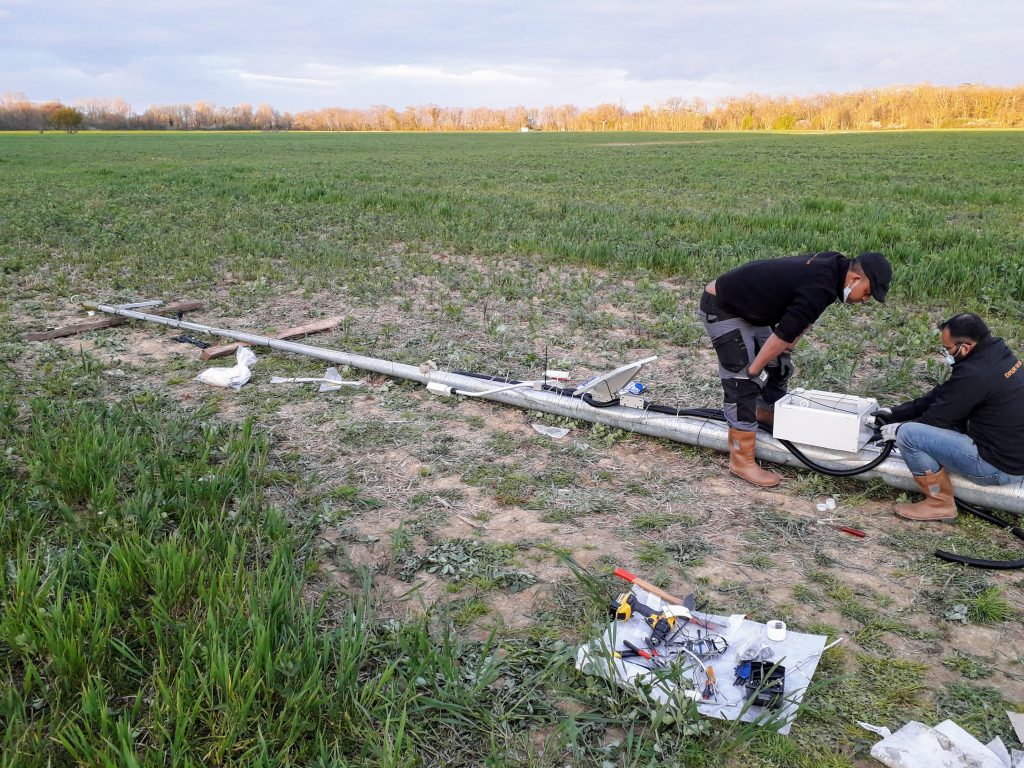 In spite of not so promising weather forecast which were fortunately systematically denied by the facts (well ok, it was quite chilly and it rained on Friday), Hery and Mohamad from CIMEL were able to proceed with the installation and wiring of the instrumentation to the mast on the ground as early as Tuesday March 16. This includes: a masthead robot, a lightning rod, an inclinometer, a GSM antenna, a solar panel, a hygrometric probe, a GPS antenna and an acquisition box, as well as the multiple corresponding cables.

Once the mast was equipped, it was Jean-Philippe, from the Lamothe farm, who proceeded to lift the whole thing on Wednesday March 17. The maneuver caused us some cold sweat, but went well, causing only minor damage quickly repaired on the ground cable. 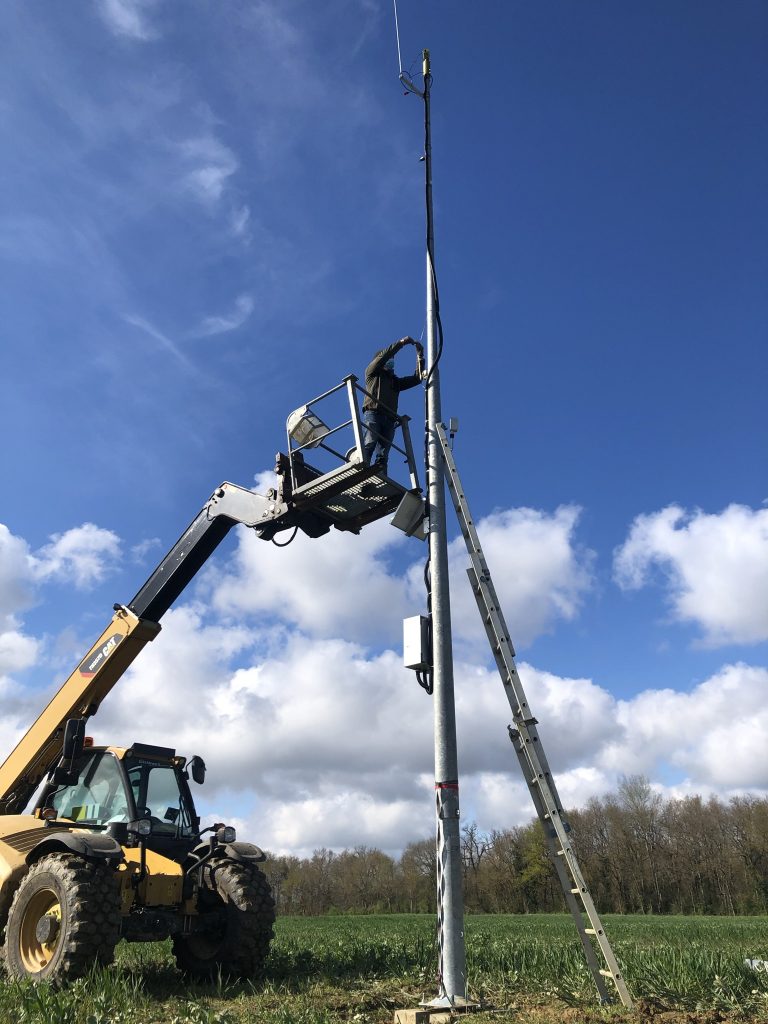 The sensor is installed on a tilting mast, which greatly facilitates the maintenance of the whole instrumentation. The last step, once the mast was in place, was to put the photometer on the robot, with its collimator, and to pre-set the alignment of the photometer. 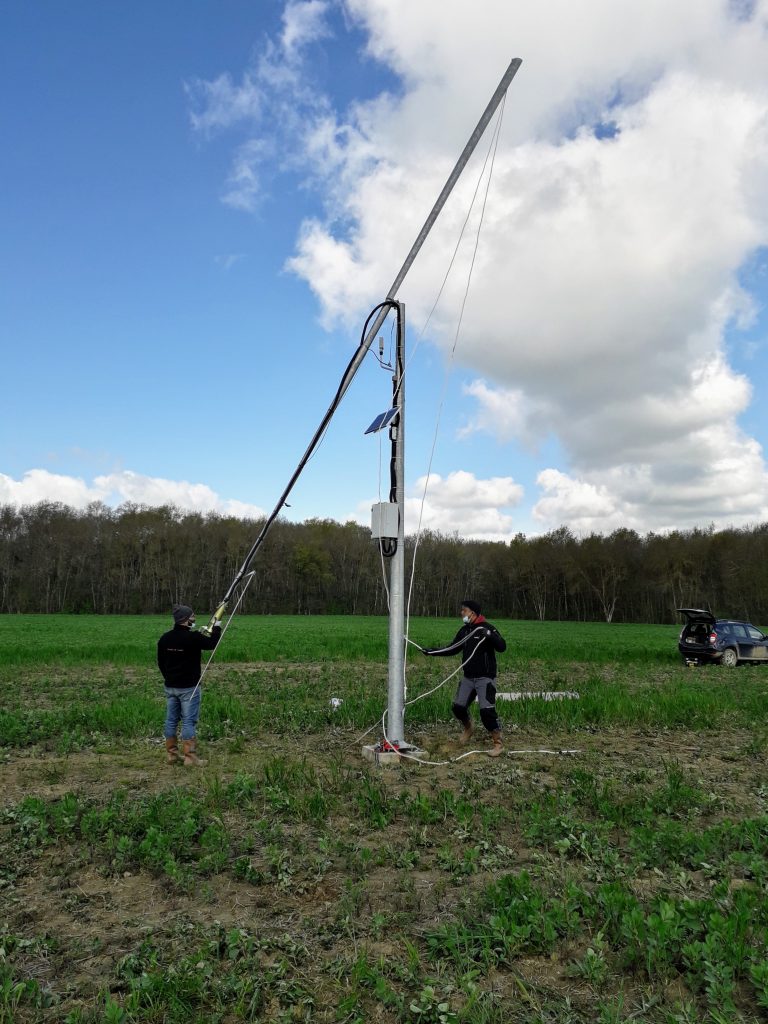 The acquisitions started when the sun showed up on Saturday March 20. The data are automatically transmitted to CESBIO and CNES every hour via the cell phone network (GPRS). If the intermediate crop currently in place is not very interesting in terms of BRDF (especially because we trampled it quite a lot around the mast these days…), the period from the end of April to the end of August will cover a new maize crop cycle (the now famous 4-meter-high-maize from Lamasquère!). So we will for sure publish new interesting data very soon!

We wish to send a big THANK YOU to the CIMEL team for its efficiency and good mood, to Baptiste from CESBIO for the inclinometer device, to Cedric Hillembrand from OMP SI for the data server, as well as to Gervais and Jean-Philippe from Lamothe farm for their decisive help in lifting the mast and for hosting our station on their land! 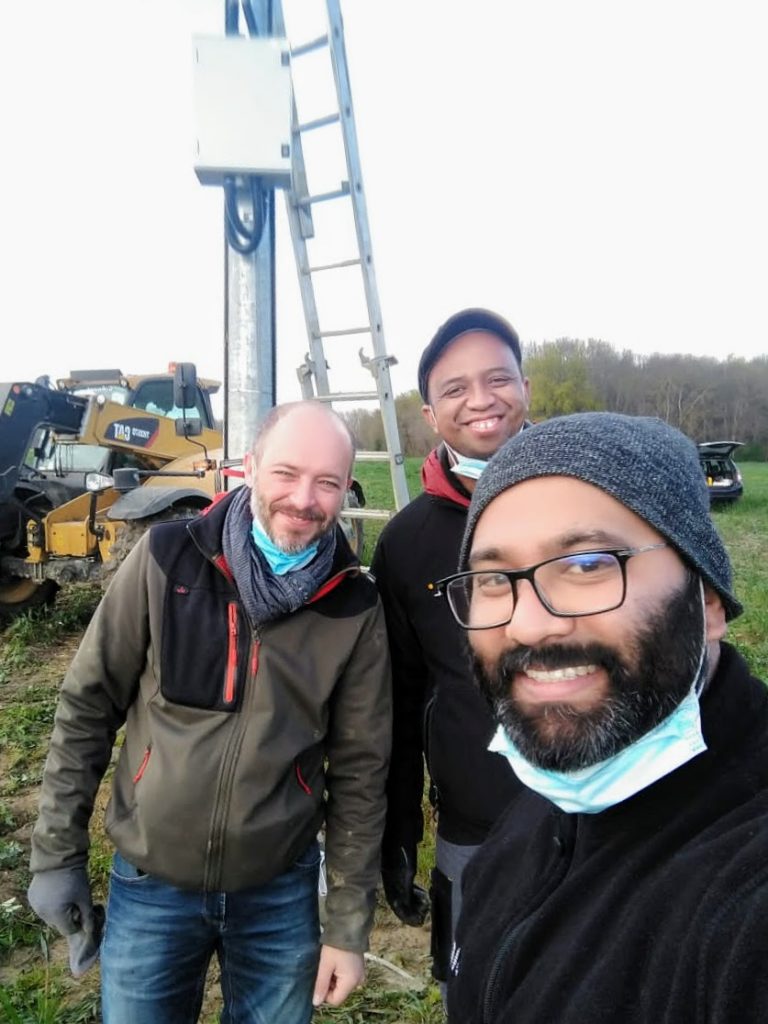 (from right to left: Mohamad (CIMEL), Hery (CIMEL) and Jérôme (CESBIO), all three relieved to see the mast standing up)