The adjacency effects, how they work.

As explained in the post about atmospheric effects, the scattering of light by molecules and aerosols in the atmosphere brings about several effects : scattering adds some haze on the images (the atmospheric reflectance), lessens the signal from the surface (the atmospheric transmission), and blurs the images (the adjacency effects). This post is about the adjacency effects, the other aspects have already been quickly explained in the above post. The figure on the right shows the types of paths that light can follow before getting to the satellite. Path 1 corresponds to the atmospheric reflectance, path 2 is path that interacts with the target, it is the one which is useful to determine the surface reflectance, paths 3 and 4 contribute to the total reflectance but interact with the surface away from the target. These paths are thus the cause of adjacency effects and they blur the images.  If not corrected, adjacency effects may cause large errors. Let’s take the case of a fully 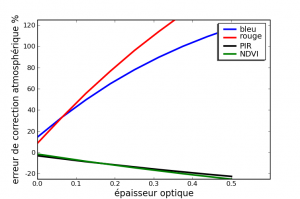 developed irrigated field surrounded by bare soil. For such a case, the second figure on the right shows the relative percentage of errors for reflectances and NDVI as a function of aerosol optical thickness, if adjacency effect is not corrected.   An approximate correction can be applied, but it thus requires to know the aerosol optical thickness. In our MACCS processor, here is how it works :

As this processing uses convolution with a large radius, it takes quite a large part of the atmospheric processing time.

The images below show 3 stages of the atmospheric processing, for 2 Formosat-2 images obtained over Montreal (Canada) with a 2 days interval. The first image was acquired on a hazy day (aerosol optical thickness (AOT) of 0.47 according to MACCS estimate); and the second one on a clear day (AOT=0.1).

TOA Images (On the left, the hazy image)

Surface reflectance under uniform landscape assumption (on the left, the hazy image)