MUSCATE is a name you may have already read on this blog. It is the processing ground segment CNES set up for THEIA land data center. We used to process SPOT (Take5), Landsat 8 or SpotWorldHeritage data with a prototype ground segment. But to produce the Sentinel-2 level 2A data we had to scale up the system. Based on the prototype feedback, CNES started the development of an operational version of MUSCATE. The development was led by Joelle Donadieu and Celine l’Helguen, and the contract was awarded to CAP GEMINI. The system also relies on CNES computing center, and of course, the Level 2A products which include atmospheric corrrection and cloud masks are based on  MACCS method. The MUSCATE system was delivered to CNES a few weeks ago, and it is now being technically qualified. It is a fully automatic system : After a configuration phase, uploading the data to a directory triggers the data assimilation, processing, packaging and distribution to users, without human intervention. 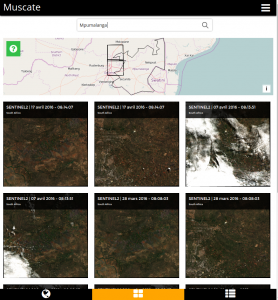 MUSCATE just processed the available time series from Sentinel-2 above 16 different tiles in the blink of an eye.  The image on the right shows the catalog images obtained for one of these sites in South Africa. Before the production starts, in June or July, there are still a few steps to go, including the transfer to the production team, and some bug corrections. The most annoying one appeared in the preparation of Digital Terrain models to correct for the terrain effect, which is affected by a little bug in the resampling function of GDAL Some work is still needed to mitigate this issue. However, I am very pleased to show some of the quick looks of the products generated by MUSCATE and MACCS on Sentinel-2 data from the tile 29RNQ in Morocco, South of Marrakesh. The images of the 27th of February was taken just after a heavy snowfall, which melted quickly afterwards. This region is in fact affected by a bad drought this year. The data presented were corrected from atmospheric effects by MACCS. The detected clouds are outlined in green, the snow in pink and water in blue. All the clouds are very well detected, and false cloud detections are very scarce. The most frequent confusion, is the misclassification of partial snow cover as clouds.. The cloud shadows will be well detected with the next version of MACCS, which includes the improvements brought by Mireille Huc (CESBIO) for Take5 and Landsat 8, on MACCS prototype.