The Sentinel-2 tiles, how they work ? 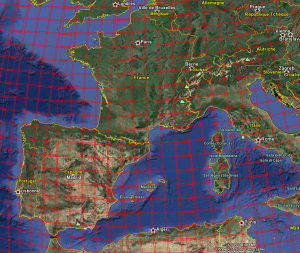 The Sentinel-2 Level 1C products will be split into tiles. and I have searched a little how the naming convention of Sentinel-2 tiles works. I have found some interesting resources in Sentinel-2 website :

Here is  what I have guessed :

Sorry for that, I would like to have a formula which guesses the tile name as a function of the longitude and latitude, but I am not able to figure out one. Has any of you heard of one ? What I am happy with is the fact that tiles overlap by 10km. This ovelap means an increase of 21 % of the data volume, which is already large, but enables to process Level 2A products independently. It is very difficult to detect a cloud shadow when you do not see the corresponding cloud. And on the edge of the tiles, you will have shadows on clouds you do not see. But thanks to the overlap, the shadows will be well detected on the other overlapping tile. A colleague of mine told me this grid was born in the brain of an American solldier (yes, soldiers have brains ). Here is a description, which sadly does not tell how the two last letters were defined. This said, in 1789, during the French revolution, a project to devide French territory in tiles had been set-up by the Sieyes-Thouret comittee. The project was not appproved, but if it had been, I am quite sure that Lamartine would have found much more poetic names than those used for Sentinel-2.