The snow you can’t see

These white spots were artificial snow spread by snow cannons. At the same time of the Sentinel-2 acquisition, they were also « visible » as cold spots from our thermal infrared camera installed at Pic du Midi. 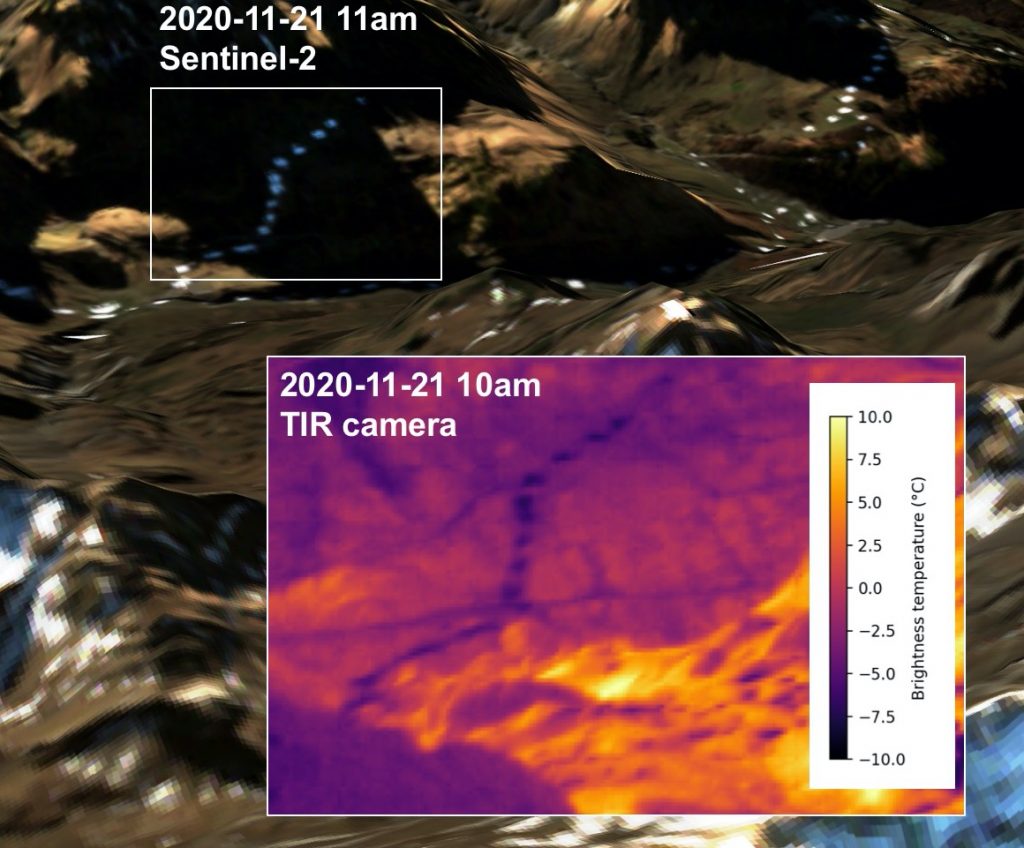 This year in November too, we noticed the same patches in the thermal camera pictures… However, the surrounding surface was also snow-covered therefore the patches were invisible in webcam pictures taken from the same location.

This year’s artificial snow patches were much warmer (8K) than the surrounding natural snow cover. Such thermal anomalies surprised us since the snow surface temperature is expected to be primarily influenced by atmospheric and radiative forcing (Pomeroy et al., 2016). Hence, the snow surface temperature should be rather homogeneous in areas with similar atmospheric and radiation forcing (experts say that it should not depend much on the physical properties of the underlying snow layers). 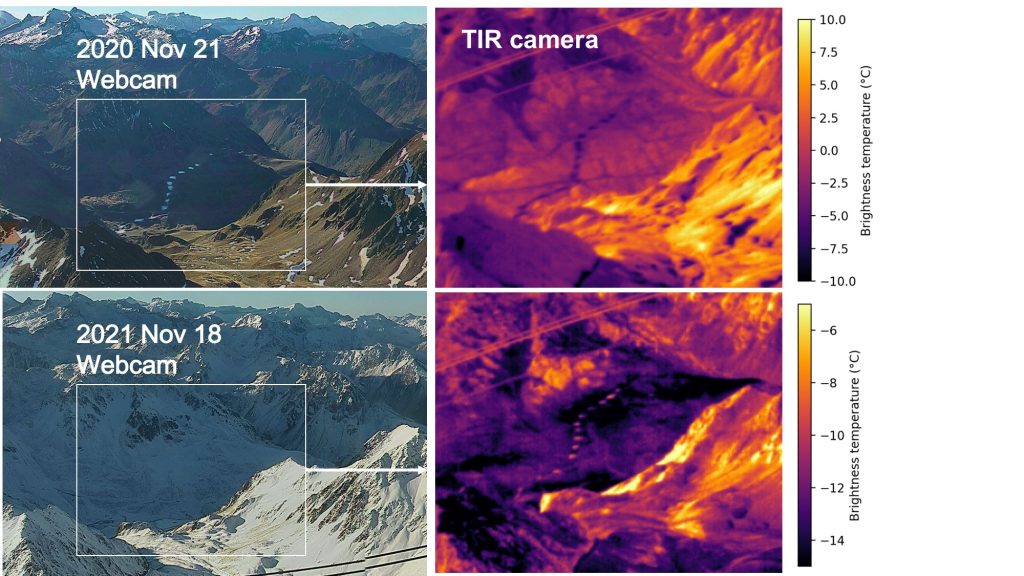 In fact, the « warm » patches were not « visible » anymore in the images captured later in the afternoon. 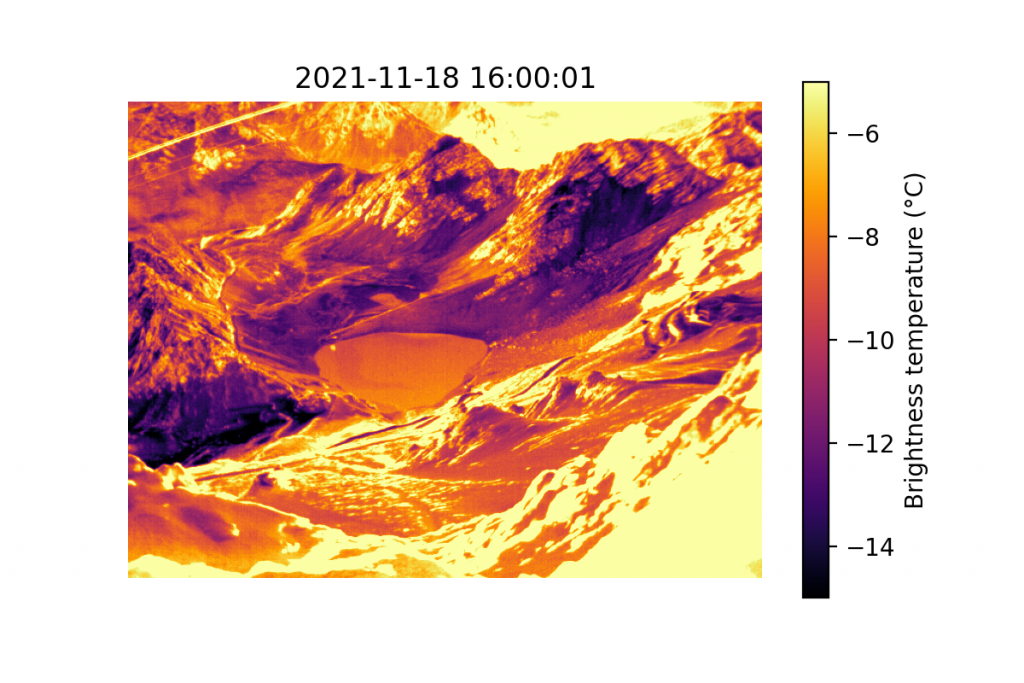 Artificial snow grains and natural snow grains have different shape and size. As a result, artificial and natural snow covers have different optical properties, in particular reflectance and emissivity. Reflectance in the shortwave controls the energy absorbed by the surface snow, while emissivity controls the radiant energy emitted by the surface snow. Hence both properties could explain the difference in the snow surface temperature. Pomeroy et al., (2016) consider that the snow surface temperature is secondarily affected by absorption of shortwave and near infrared radiation (especially in this case, we are at the beginning of the winter, the content in light absorbing impurities such as dust is expected to be low). Reported variations of the snow emissivity due to snow grain type is likely not sufficient to explain such temperature contrasts either (Hori et al. 2006). Therefore, the observed temperature differences are probably not due to the differences in optical properties of the artificial vs natural snow.

Artificial snow is produced from liquid water (above 0°C) that is atomized into fine droplets. The snow cannons are operated when the air is sufficiently cold and dry for ice crystals to form. Yet the phase change from liquid water to ice requires a lot of energy. If some droplets don’t freeze before hitting the ground the snow will be « wet » (Lintzen 2012). Here it may be what happened, the snow grains which deposited on the ground were much warmer than the surrounding snow and even a bit wet. This warmer, artificial snow cover radiates more in the thermal infrared.

These spatial variations in longwave radiation are well captured by the thermal camera despite a distance of ~ 5 km between the camera sensor and the ski slopes on the other side of the Barèges valley. In the spectral window of the thermal camera (7.5 – 13 µm), the atmosphere is expected to be nearly transparent. Is it? This is something we need to investigate to be able to relate the camera images to actual surface temperatures.. 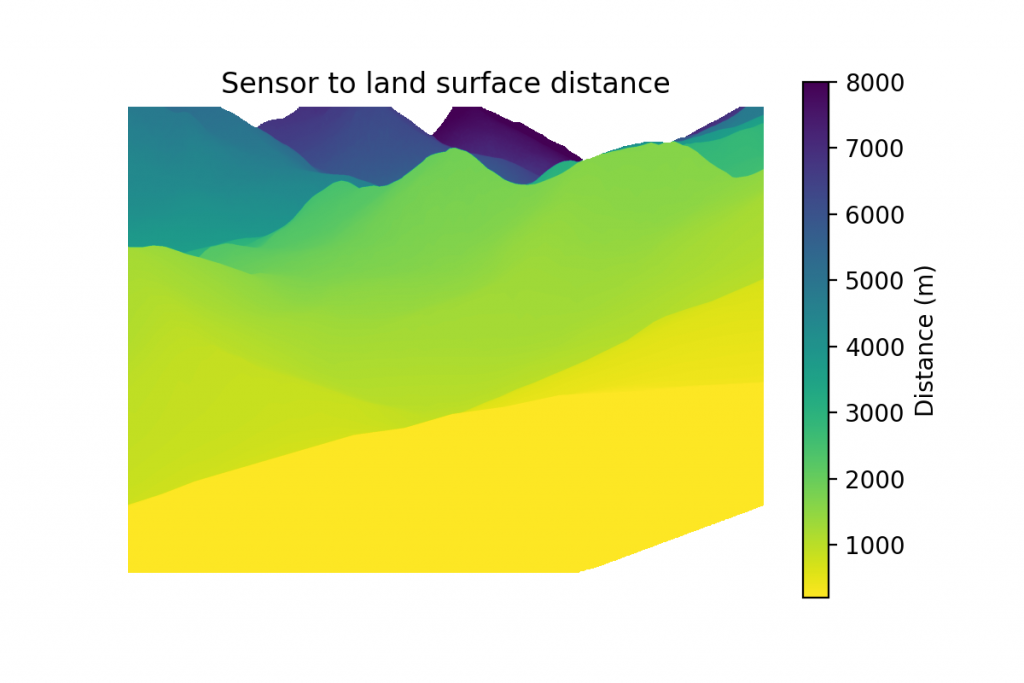 Thanks to Baptiste for spotting this and to Ghislain for the fruitful discussion!