THEIA distributes L2A Sentinel-2 data over Italy, Switzerland, and most of Alps

Done ! All Sentinel-2 data acquired above Italy, Switzerland and Austrian Alps, and processed at level 2A, are now available on 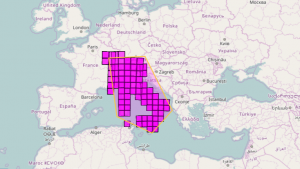 Theia website! The data format is described here. We would be very thankful if users in Italy or Switzerland could help us spread the news among remote sensing users in both countries. The level 2A product provides surface reflectances with a good cloud and shadows mask. The processing is done at CNES, within MUSCATE facility, using the MAJA software, developed by CNES, CESBIO and DLR. The production started with data acquired in December 2016, and will go on in near real time.  Together with Spain, Belgium, Luxembourg and even Portugal and Netherlands, most of France’s continental neighbours are now processed. Germany is still missing but DLR, the German Space Agency should soon start to deliver the data acquired above Germany. All the tiles processed in real time by THEIA are displayed below in red or blue (for the most recent ones).

Here is an example of the time series available over Napoli in Italy, on the left for MAJA, and on the right for Sen2Cor (using data available at Copernicus Hub, Medium probability cloud mask). In both animations, the clouds are circled in green, shadows in yellow. You may click on the animation to see it with a better resolution.

I think you can easily spot one of the differences between MAJA and Sen2cor : for Sen2cor, every bright surface is a cloud : buildings, greenhouses (south-east corner), bright soils and sometimes snow. I don’t mean Sen2cor developers did a bad work, but as Sen2cor does not use multi-temporal criteria, contrarily to MAJA, it lacks information to tell clouds from bright surfaces. The differences in cloud mask quality between MAJA and Sen2cor have also been quantitatively estimated in this post. It is also a bit sad to see the area of forests which burned since beginning of July, around the Vesuvio and in the South East part of the image. Many green areas have turned brown, and we can even spot an active fire in the most southern forest on the 6th of August.

3 thoughts on “THEIA distributes L2A Sentinel-2 data over Italy, Switzerland, and most of Alps”