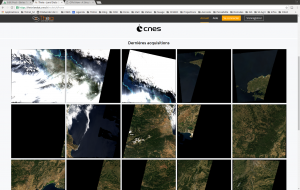 It is true that many of us can be moved by the Landsat L2A data produced by THEIA, but this time, the data were literally moved. The presently used downloading site http://theia.cnes.fr is being prepared to host Sentinel-2A data produced by the operational MUSCATE ground segment, and meanwhile, the prototype center goes on producing LANDSAT L2A data abovce France. However, their format is not compatible with the new server.As a result, LANDSAT data will stay hosted on the old server, whose address has just been changed. THEIA’s L2A LANDSAT data are now distributed at :

On this server, you will find the LANDSAT data acquired above FRANCE and oversea territories since 2009 for France, and since 2013 for overseas. The data are corrected for atmospheric effects and are provided with a cloud mask and a cloud shadow mask. They are split in 110*110 km2 tiles, and in Lambert 93 projection. When MUSCATE is ready, we will reprocess all LANDSAT 8 data with the new system, and will distribute them from the new server. This time, the data will be projected on UTM projection and the tiles will be the same as for Sentinel-2, to allow a better combined use.