VENµS monitors the resillience of Bouconne forest to caterpillar defoliation

I left you in mid-July with an unbearable suspense: would the Bouconne oak forest, the real lung of the Toulouse conurbation, resist the 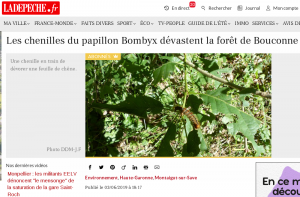 caterpillar attack of which it was the victim? The gypsy moth is a small butterfly whose voracious caterpillar appreciates oaks. This year, the moth caterpillars have flourished in some areas of the Bouconne forest, to the point where its damage has become visible from 700 km above sea level. Everything was explained in this post at the beginning of July.

But rest assured, our satellites have continued to watch over the forest, and it is with joy that we can see that everything is better, thanks to this beautiful series of images from the Venµs satellite of CNES and the Israeli Space Agency. In these images, we used false colors, and the vegetation appears in red. It is the observation in the near infra-red band that is most sensitive to vegetation strength, and it is this spectral band that appears here in red. On this series, we notice the defoliation effect is most significant in June, on two areas of the forest whose color turns brown, and that from mid-July, the situation improves. In the last image of August 4, there is only a slight difference between the areas attacked in June and the others.

Now that the caterpillars have metamorphosed into butterflies that enjoy their summer thinking only about gathering pollen and breeding, the oaks have been able to take advantage of this break to produce new leaves, and start storing reserves for the winter. Experts indicate that in years of moths attacks, which fortunately do not occur every year, the rings on the trunks are tighter, which proves that the attack has an impact on tree growth. If some of these specialists are passing through here, I would like to know why the attacks were concentrated on two bands of the forest, and not on the whole forest. Why did some parts resist better than others? Do we have different tree species, different ages, different soils?

By the way, you can note the large number of clear images available in this series, thanks to the temporal repetitiveness of Venµs, which makes observations every other day. These data have been corrected for atmospheric effects, this is what we call Level 2A products. You can see that the image colours change very slowly with time, without the variations due to the amount of aerosols in the atmosphere. This shows that our treatments, performed with MAJA, work quite well. If you wish to access the data, it is available, free of charge, on https://theia.cnes.fr.

You are now relieved, so I wish you an as good summer as the one enjoyed by the gypsy moths (in their butterfly form)!