As are to well aware 2020 and 2021 were very strange years. I sincerely hope 2022 will see a slow but constant return to some sort of normality.

But, even though we were somewhat silent, many things happened. The most important and striking activity was the total reprocessing of the SMOS data set as summarised below. but several other activities went one and I will endeavour to post summaries in the next few weeks to keep you updated in case you miss a few. They will cover new science achievements and the trial and tribulations of the SMOS follow on activities.

During the last years the SMOS ESL teams (Expert Support Laboratories) and many other science groups worked very hard to extract all what was possible from SMOS (and SMAP) data. The good news is that we are still (very) far from the end of teh discovery of new science applications! teh bad news ( in a way) is that algorithms have to be updated and data reprocessed which (we now have more than 12 years of data) is getting to be a huge task! And I wish to thank the DPGS (and CATDS) for the excellent job they did to manage reprocessing all this data in a seamless fashion and with extreme efficiency! What would we become without them?

Significant changes were brought to both Level 1, level 2 ocean and L2 land (which proved to increase the headache of the validation as it implied many back and forth iterations) and we can say that the improvements are significant.

For Level 1 the changes aimed at improving the stability (crucial for SSS activities), reducing the land ocean perturbations by implementing a so called GIBBS correction, finagling the calibration and improving RFI detection. (for more details see the release note of level 1)

Figure 1 gives an idea of the evolution of the SMOS TB between V620 (previous) and V 724 (current)as well as – incidentally the somewhat strange temporal evolution of Dome C Tbs in H pol (evolution confirmed by all sensors!) New science to be made here?

Over oceans and land the algorithms also evolved to capitalise on the improved quality of L1 as well as from algorithm improvements and improved auxiliary data sets (to a lesser extent). For L2 SM for instance, a significant improvement was obtained by simply doing something long overdue and planned from the beginning. Actually, V650 was still running with the default, pre-launch values set for vegetation opacity and single scattering albedo. Putting correct values improved drastically the metrics at the cost of a slightly degraded negative bias. Another significant improvement was obtained by replacing – for organic soils- the dielectric constant model of mineral soils by a more appropriate one (the Bircher’s model). 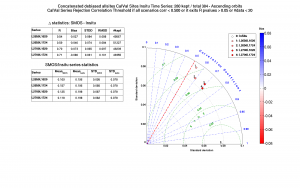 Figure 2 shows for instance the evolution of the L2 soil moisture metrics. The statistics are built by concatenating all the available ground data sets (we are not supporters of averaging correlation coefficients!) to be compared to satellite retrievals. 1 is the previous version of the algorithm, 2 is the new L1 with the old L2, 3 is the old L1 with the new L2 and finally 4 is the current product.

So now the data set has been totally reprocessed (from 2010) and the operational processors runs  all with these updated  algorithms ensuring total data consistency. Anyone can access and retrieved data from the ESA platforms as in the past.

To conclude this part, data quality as improved and with a significant step for all products. If you are using levels 1 or 2 make sure that you are using a consistent and homogeneous data set byrty retrieving teh reprocessed suite.