In this section you can follow the drought at global scale using the new CATDS Level 4 SMOS Drought Index (SDI).

Here are some captures of droughts that are followed as of begining of April 2012 by the Drought Monitor:

What advantages in using SMOS soil moisture for drought monitoring ?

Drought is driven by scarcity of water in the first meters of the surface. This creates stress and drying of the vegetation. The SMOS observation of soil moisture in the first centimeters is a very precious information to model the drought. The surface soil moisture (~5cm) is an intermediate water content between the skin surface and the root zone soil moisture. By delivering the soil moisture at the surface SMOS mission reduces the uncertainties in other processes at the surface that contribute to the water budget. The main processes involved are precipitation, runoff and surface evaporation. Lets consider each of these processes.

On the other hand soil moisture is highly correlated over time, relatively to other processes. In tempered areas the drying of the soil surface occurs over a time period of several days, this is less true in semi-arid regions due to fast evaporation. Nevertheless SMOS with two global coverage every 3 days captures the dynamics of the soil moisture quite well. So as written above by acquiring this intermediate physical information SMOS reduces the uncertainties associated with the other processes. But modeling is still needed for the transpiration of the vegetation, the water flux between the SMOS layer and the deeper layers and the drainage to groundwater. This is where the double bucket model interviens.

One should not forget also the drawbacks of the SMOS signal. It is complex to analyse and presents some underestimation of the soil moisture. This is due to combined physical and instrumental reasons. On the physical side the SMOS soil moisture is generally compared to in-situ measurements that have a deeper representative soil thickness, this we call the vertical representavity. Then there is the 2D spatial heterogeneity where the SMOS signal is aggregated over discrete frequencies, over a heterogeneous surface (water, forest, baresoil,…), combined to multi-angle observations (impact of the angle of view and antenna pattern). The second one culd explain variability but not bias. The other explanation for the underestimation could be in the reconstruction of the signal. SMOS is an earth observation opportunity mission from ESA (CNES & CDTI), it is a new instrument with new technology in earth sattelite remote sensing (L-Band interferometric radiometer) so many enhacements, discoveries and surprises are yet to come by a myriad of researchers analyzing the data.

Contrary to classical drought indexs that are more based on models or statistical timeseries analysis. The SMOS CATDS Level4 Drought Index relies more on the retrieved soil moisture from observations. So this index is more dynamic and can in some cases represent more realistic contrasts where the other models are constraint by the calibration and the statistical representativity of the time series. Other cases where the index is less reliable due to instrument and model errors are also to be considered. Notice near the coast where the SMOS signal is not retrieved. Also the case of restricted areas where radio frequency interferencies are permenantly poluting the signal. In this product the effect of RFI is reduced by the direct assimilation mecanism and by the use of the L3 Soil Moisture multi-orbit retrieval products from CATDS. The conclusion is that the more the remote sensing data is close to the process we need to model, the more the model needs to be simple.

In the context of a collaboration on the (SMOS+Hydro) project with the Land Surface Hydrology group at Princeton, Eric Wood, Justin Sheffield and Nate Chaney showed us the Princeton Africa Drought Monitor. A very interesting project where data from the VIC hydrological model is used to monitor drought. This project has direct benefits for the population touched by the drought as they have a easy to use but complete tool to follow the drought. It seemed evident for us that the SMOS L4 Root zone soil moisture index will be of great added value to the Africa Drought Monitor as a more remote sensing based indicator. So in a common effort the SMOS indicater has been integrated to the web-based interface. We hope from the feedback that we will be able to converge the model based and remote sensing based indicators to a better reliable indicator.

Check the link here to see the SARI (SMOS Africa Root zone Index) in the Africa Drought Monitor (Princeton). (look at 02 April 2012, operational product will be available soon)Also user can see here the US Drought Monitor by the Princeton team maintained by Ming PAN & L. LUO 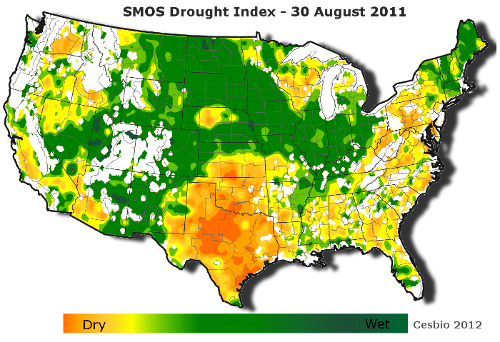 The results from the root zone soil moisture index (second layer) are used to retrieve a drought index. This index is under development. And will be made available soon. It takes into account the severity, magnitude, duration and spatial extents of the drought.
The SMOS data are quite new (starting 2010) compared to drought indexes that based on timeseries analysis over decades, so the new index will be enhanced gradually as our comprehension of the SMOS dataand the modeling needs increases.

We show here a static image of the SMOS L4 Drought Index v0.1 as we computed it for the last Drought in the US in 2011.

What does Level 4 SMOS product include ?

This new product is part of the level 4 SMOS products. These are end-level products, obtained by the combination of the SMOS data to physical models (hydrological, statistical with/without data assimilation…) or by using remote sensing data from other sensors (Disaggregation, data fusion, synergie …).

One thought on “Drought Monitor”