SMOS: A new tool to monitor the carbon budget of vegetation: first application to the African continent

How do the vegetation carbon stocks change at the continental scale? What are the drivers of these changes? These are central questions for the sciences of Climate and for the application of international agreements on climate. A study coordinated by the University of Copenhagen1 has developed a new approach to investigate this issue. In collaboration with scientific teams2 from CEA, CNES and CNRS, INRA has coordinated the development of the new data set derived from SMOS microwave observations which is used to quantify vegetation carbon stocks. The study demonstrates that over the African continent and during the 2010-2016 period, the net carbon balance is negative (corresponding to a decrease of the quantity of carbon stored in the vegetation biomass) and that most of the carbon losses occurred in dryland savannahs. These results were published on 9th April 2018 in the journal Nature Ecology and Evolution. 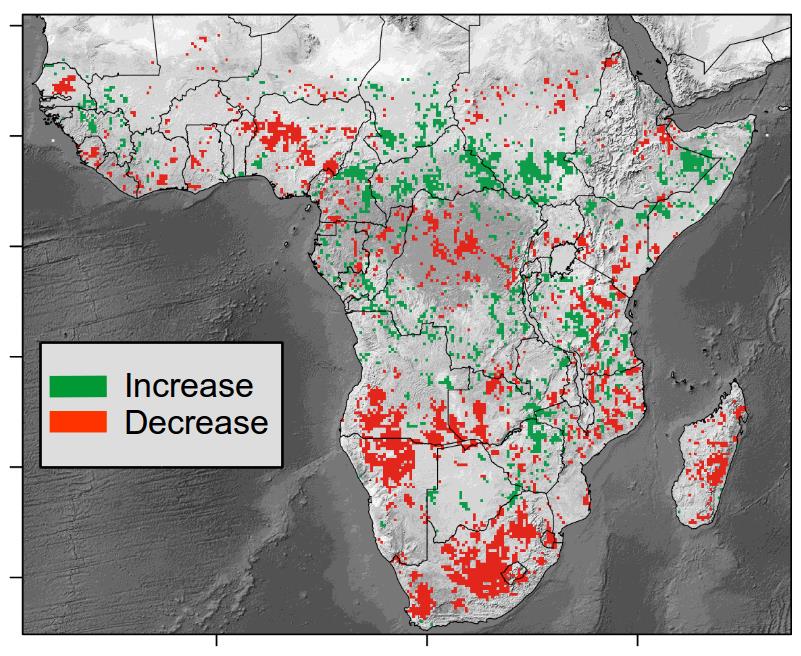 Scientists from INRA and their colleagues have produced a new data set of the vegetation index referred to as L-VOD (L-band vegetation optical depth), retrieved from space-borne observations of the SMOS satellite over 2010-2016. The data have been used to quantify annual aboveground biomass-carbon changes in sub-Saharan Africa stocks over the time period. The L-VOD index computed from SMOS observations allows sensing the whole canopy layer, while remote sensing observations made so far (including VOD indexes from high frequency microwave observations) were limited to sensing the top of the canopy, especially over relatively dense forests. In this study, the L-VOD index brings a temporal dimension to global, but static, maps of the above ground biomass.

This new method allows to monitor the seasonal dynamics of vegetation carbon losses and gains and also to link them with the impact of climate. The results demonstrate the key interest of SMOS L-VOD as a complementary data source for the quantification and monitoring of carbon stocks for national reports and large scale efforts in the framework of international initiatives such as the United Nations Framework Convention on Climate Change (UNFCCC) and the Intergovernmental Panel on Climate Change (IPCC). The SMOS L-VOD index is particularly relevant to study relatively dense vegetation ecosystems where the signal measured from other remotely-sensed system saturates. It is also very relevant for semi-arid regions with little inventory data.

The study demonstrates there is an overall negative net carbon budget for sub-Saharan Africa (−0.10 PgC yr−1) over 2010-2016 and that the majority of the net losses occurred in drylands. In the latter regions, the gross loss per year represents approximately

5% of the dryland total carbon stocks in Africa. Overall, most of the detected decreases in carbon stocks in drylands were related to abnormally low soil moisture and rainfall conditions. The analyses showed there is a high inter-annual variability in the vegetation carbon stocks with gains during very wet years in (2011) and losses during in 2015 and early 2016, following a severe El Niño episode.

This study questions the general understandin

g that drylands may serve as carbon sinks on the long term. Indeed, the authors have found that dry years have partly reversed this trend and that drylands (especially in southern Africa) turned from being a carbon sink into a source over 2010-2016, demonstrating that climate controls short-term variations in carbon stocks at large scales.

So, in the long term we need to reassess whether woody vegetation in African savannahs will continue to be a carbon sink.