After the first image it was obvious that SMOS was running smoothly but still more works had to be done. The Commissioning phase started. We were tasked to make the first products, validate them and select the final mode of operations. For instance two options were possible, dual or full polarisation. If full pol was attractive, it also meant a degradation of sensitivity. Luckily after many tests (SMOS was operated alternatively full and dual pol, one week each for enough time to be able to reach a decision) it was found that thanks to the instrument excellent performances ful pol was perfectly acceptable and was thus selected. But all was not nice. Over oceans reaching the hundredth of a K was challenging , stability was yet to … stabilize etc. For the former  J. Tenerelli suggested to use a diagnostic tool the so called OTT (Ocean Target Transformation) which was soon to become “the tool” over ocean surfaces. for the latter the instrument did stabilize in May. This is why we generally recommend to only use data from June 2010 for delicate studies. But all this was expected and did not come as a surprise. the surprises were really bad news…First the local oscillators of one arm, once disturbed, did seem unable to relock and needed a complete reboot… not good. This was swiftly cured by using switch to the redundant (nominal actually) segment. Again business as usual. What was not was teh discovery of RFI (radio frequency interferences) in our protected band!!We expected some perturbations and our algorithms all had a RFI detection scheme … what we did not expect is such a large quantities of sources ! 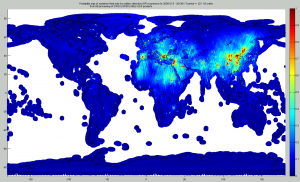 This obviously needed some sort of an action! we started identifying, locating, reporting these bad guys. Some were out of band emissions, but too strong to be legal, some downright “outlaws”. emitting in band. The work was/is done by Colleagues at ESAC and at CESBIO while the  reporting is done through the ANFR and managed / coordinated by ESA with some success as in many areas the situation is significantly improved (North America, Greenland, western Europe, …). the “cleanest country is probably Australia while the darkest is Japan which changed in 2011 from rather OK to completely obscured by RFI. Japan is no more on the L band Map!

These findings enabled Aquarius to be prepared while SMAP could design a very sophisticated receiver able to reduce the impact of RFI on data.

But we have to be very careful many frequency greedy groups are also lurking in the background on top of those mentioned above… which could jeopardize the wealth of results L band radiometry ids offering us (more about this in the next posts) and which can be illustrated by the first ever Soil moisture – Ocean Salinity map ever produced from space .. thanks to SMOS

Note that since 2010 many progresses were made and we have much improved results by now… stay tuned!