Ifremer, through its research work and expert advice, contributes to knowledge of the oceans and their resources, to monitoring of marine and coastal environments and to the sustainable development of marine activities. To these ends, Ifremer conceives and operates tools for observation, experimentation and monitoring, and manage the oceanographic databases.Created in 1984, Ifremer is a public institute of an industrial and commercial nature (EPIC). It is supervised jointly by the Ministry of Higher Education and Research and the Ministry of Ecology, Sustainable Development and Energy. Within Ifremer, the Laboratory of Oceanography from Space (LOS) is seeking to appoint a Researcher to reinforce is major role and expertise for the production, validation and scientific exploitation of the Sea Surface Salinity (SSS) data obtained from several satellite missions such as SMOS, Aquarius, potentially SMAP and AMSR-2. LOS develops closed partnerships with the French scientific community, also collaborating with international partner organisations (ESA, CNES, NASA, EUMETSAT,..) in the frame of several national and international projects, including contractual activities.The LOS includes a research and data processing team to gain a better knowledge of the ocean from various observations. This group gathers technicians, engineers and researchers to conduct analyses, algorithm development, processing and distribution of elaborated geophysical products derived from the combination of in situ and satellite observations, such as surface winds, surface waves, currents, surface temperature and salinity, sea ice characteristics, …The satellite missions to estimate sea surface Salinity are rather new with the first launch end 2009 for the ESA SMOS mission. These new datasets still demand a strong expertise in both passive microwave remote sensing and ocean surface physics. A thematic exploitation platform dedicated to ocean surface salinity is currently under development to aim at fostering the scientific use of both satellite and in situ SSS observations, complemented and used synergistically with observations from numerous other Earth observation instruments (temperature, altimetry, scatterometry, optical and ocean color properties, precipitation,..).The successful researcher will contribute to improve our understanding of the dynamical processes responsible for the variability of the SSS fields associated with the global water cycle. Research themes are open to different aspects on specific physical processes (vertical mixing at small scale, meso-scale horizontal transport, air-sea interactions, Evaporation minus Precipitation or river run off fluxes, mixed layer and haline stratification, etc..) or/and focus on key geographic zones (oceanic basins, marginal seas, river run off, Tropical Cyclone area, polar regions..). The researcher will develop analyses based on existing in situ and satellite data but will also consider the potential combination with new and future missions observations (Sentinel-1 and 3, SMAP launched since january 2015, CFOSAT with a foresseen launch in December 2017, or SWOT in 2020).As principal activities, the researcher will have to:• Undertake studies on the signatures of the global water cycle and its variability in ocean surface salinity,• Exploit the complementarities between in situ and satellite observations characterizing the upper ocean salinity,• Participate to the definition and exploitation of future and new observations (combined exploitation, SMOS follow on, GNSS-R, …), and of new measurement protocols,• Identify new fields of applications involving the combined use of observations characterizing the coupled atmosphere/ocean/land/ice system.More details here 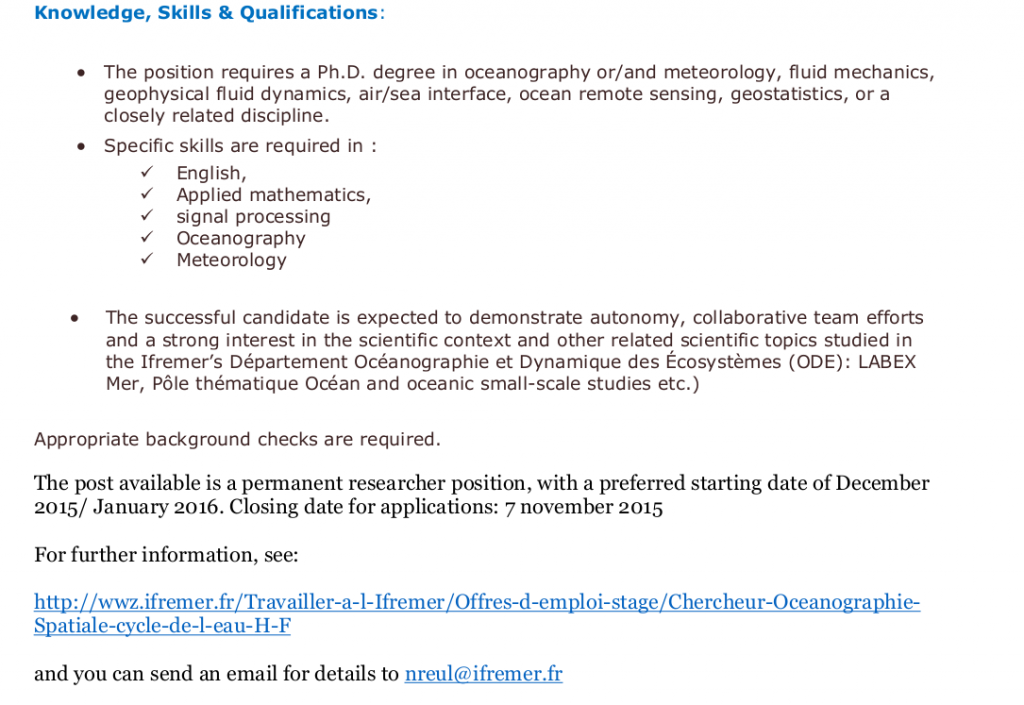