After the illustrations of some striking results over oceans, we can only marvel, especially as many other aspects were not covered.  Eight years ago we did not have any of such applications and science return. Those span from rainfall estimates over oceans to wind speed retrievals for strong winds (tropical storms, hurricanes and the like) where wind scatterometers do saturate for lower wind speeds. SMOS, Aquarius and now SMAP do show that L band measurements bring forward many new science obviously but also many very practical and societal applications which are not fulfilled without them. 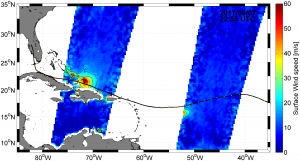 This also applies for land of course where new applications blossomed at an unprecedented rate.It exemplifies, to me at least, how real measurements can never be replaced by proxies. The first radar for EO flew in 1977 (yes 40 years ago!), the scatterometers with Envisat have been available since 1991 but we have yet to see a real soil moisture map from these. Intrinsically active systems are more sensitive to structure that to content and radar soil moisture are at best validated only over small areas where all is known, and similarly to scatterometers, rely on change detection (yes I know I am partial but I can claim that I started fiddling with radars 40 years ago and was one of the pro SCAT over land (convincing ESA to make the sigma nought triplets available over land which was not originally planned incidentally), but to realise soon that it was no game for absolute retrievals). Which means that they have to be scaled and that the validity at point (xi,yi) and no relationship with the validity at point (xj, yj) etc … but this is another story…To make a long story short a nicely coloured map has never make an accurate map.With L band radiometry no such issues and if properly done, you have access to the soil moisture per se. As a direct consequence, and in opposition to active systems, a few months only after the release of the data the first applications emerged. We saw the first use in food security (W Crow , USDA), the first drought indices really related to what was happening (A Al Bitar detecting the drought in California in 2011 when the official drought index was to detect it only a couple of years later) or monitoring the Mississippi  floods and levees destruction in 2011, the making of a flood risk forecasting tool demonstrator, the Spanish BEC fire risk analysis tool, etc… etc.. etc…There isn’t enough room in a blog to document all this so I am giving only three samples.1) high resolution soil moisture mapOne of the main limitations of passive microwave is the spatial resolution. Olivier Merlin and his team developed an approach which -in many cases enables to monitor soil moisture with a 1 km resolution as shown in the example below.

It can be successfully applied at 100 m in some cases (irrigation optimisation) as shown Catalonia (MJ Escorihuela). Other approaches rely on the use of active systems as originally planned for SMAP (N. Das) and done with SMOS (S. Tomer) or SMAP with Sentinel 1. Ideally the two approaches should be merged to my feeling.Uses for such derived high resolution products are obvious, for irrigation and hydrology as already mentioned, but also for pest control (Locusts in Africa) or epidemiology (dengue, zika and malaria to name but a few). Moreover it can be used to derive high resolution root zone soil moisture and other passive L band products. 2) Rainfall estimates over landIt is known that rainfall mission (TRMM to GPM) are very useful tool for estimating rainfall distribution over land. It is also well known that estimating rainfall with one instantaneous measurement every so often is somewhat difficult. Sometimes and in some areas/context, the cumulated errors amount to several folds. The idea is thus to assimilate soil moisture estimates so as to “correct” the GPM rainfall estimates. Pellarin, Brocca and Crow and others demonstrated the efficiency of this approach.

3) Yield estimatesSoil moisture is a driven of crop yield in many areas. First shown by B. Hornebuckle with SMOS, Gibon and Pellarin went one step further by identifying which soil moisture (30 cm deep) and which period (grain filling and to a lesser extent reproductive) of vegetation growth where the drivers for millet in Western Africa. They then compared their local estimates with FAO global maps and found excellent correlation. It is interesting to see that departures are linked to local events

Examples like this can be multiplied, I just picked some low hanging fruit. One can say that such applications an science results could be expected  and were delivered in record time. This blog is probably already way too long and I did not cover very interesting and promising results on evapotranspiration for instance, or hydrology, not to mention cryosphere … I keep the latter for tomorrow!