After a look back at oceans, soil moisture and their applications let’s have a look at colder areas….Actually during the SMOS early years we tried to get a cryosphere group  but with very limited success to say the least. Most of them were heavily involved with other missions with little time to spend on an L band radiometer of unfathomed relevance to their science.But some had ideas and looked at the data very quickly… and the number of research topics rapidly grew! I will try below to give a few examples.Of course there were some basic uses. Considering the L Band penetration depth in dry ice it was expected to ave a very stable signal in Antarctica suitable for vicarious calibration. While G. Macelloni and colleagues at IFAC implemented a radiometer at Dome Concordia, F Cabot used the site to verify SMOS calibration and sensitivity and after used it to inter-compare with Aquarius and SMAP (using SMOS capability to reconstruct their main lobe characteristics through reconstruction). He routinely monitors the L band radiometers in orbit and with M. Brogioni follows the absolute calibration through the ground radiometer. 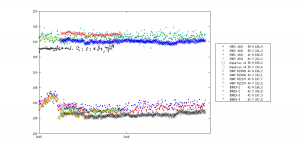 Over Antarctica several studies were performed (also funded by ESA) and products were made (available at CATDS) on estimation of internal ice-sheet temperature, estimation of ice thickness, indicator of the origin of ice-shelves variability, surface melting occurrences. But for me the most mind boggling result was obtained right at the beginning by Giovanni who identify definite signatures over lake Vostok which is some 3.7 km below the surface, while models indicate at best a 900 m penetration depth (G. Picard and M. Leduc Leballeur). Several potential explanations have been suggested but are yet to be validated.Freeze thaw was expected to be a potential products and colleagues at FMI used the Elbara measurements in Sodankylä to devise a Freeze thaw algorithm. It is now quasi operational. 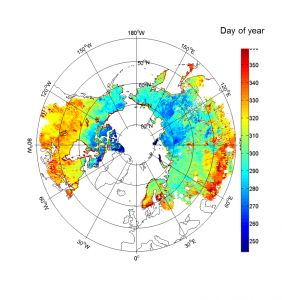 More novel the idea put forward by several scientists (G. Heygster, L. Kaleschke) to estimate thin sea ice thickness with SMOS. Now an operational product is being produced in Hamburg. It relies on the complementarity between Smos (sensitive below 75 cm thickness) and CryoSat only sensitive above a meter) the synergisms enable to track sea ice thickness globally whatever the thickness in a way, but also thin sea ice monitoring is a boon for ship routing around the Arctic (optimising between distance and ice to be broken through) and is of course very relevant for sea atmosphere exchanges.

Another ice cap of great interested is that of Greenland. The L band signatures are somewhat intriguing and several scientists are investigating it. But can already mention capturing significant melt event (as depicted by Mialon and Bircher on this blog) and some preliminary explanations for the different features seen.Over land the first issue to tackle was that of the thick layers of organic soils whose dielectric constant are quite different from that of mineral soils (even the probes, if not calibrated properly, give wrong estimates). S Bircher and colleagues tackled the issue and developed both an improved dielectric model but also an adapted soils map to make good use of it. This constitutes a major step forward for the analysis of high latitudes. It will also lead to more adequate permafrost monitoring projects.Finally I believe we are on the verge of another dramatic improvement with the very recent work done at WSL /Gamma by M. Schwank and colleagues and at FMI (K. Rautiainen and J. Lemmetyinen) as they found a way to infer snow density from SMOS data and then they are on the verge of extracting snow water content from L band radiometry.For the cryosphere, these achievements and notably thins sea ice an snow density / water content are I believe very significant steps forward!Stay tuned!